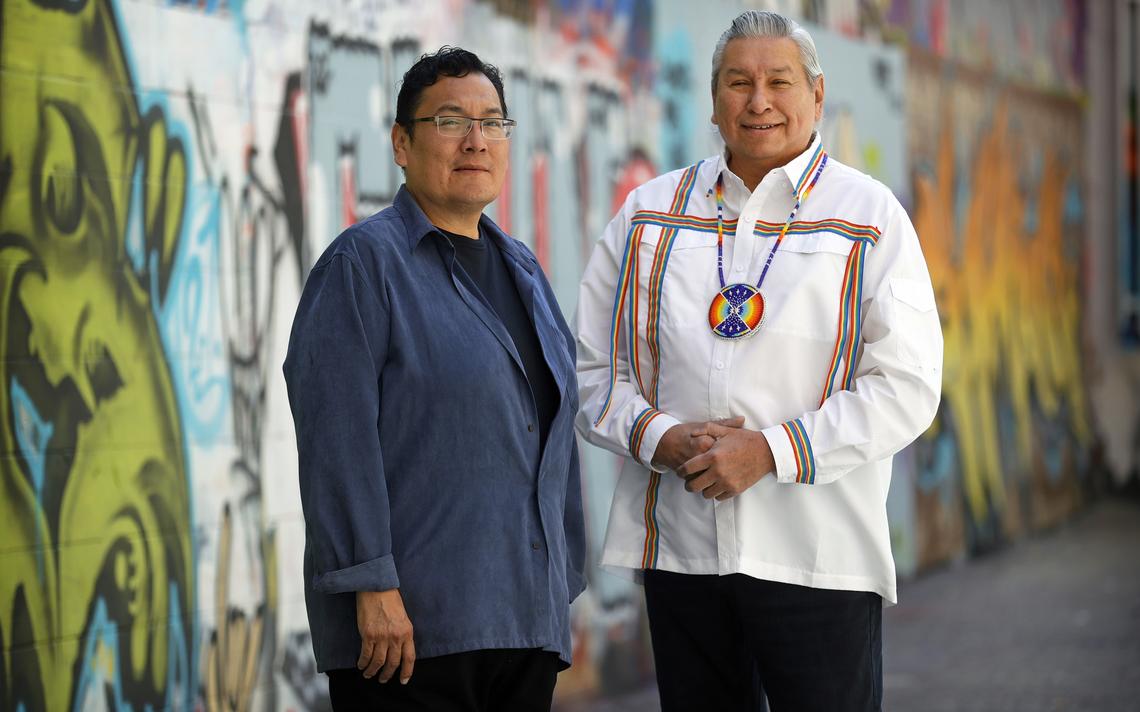 FARGO, N.D. — Cardinal Red Bird has more than one story about the verbal abuse he listened to in his on-and-off stays on the Fort Berthold Indian Reservation in central North Dakota.

“I was ridiculed and verbally harassed,” said Red Bird, who is president of the developing Two Spirit Society & Allies of North Dakota that is holding a kickoff event in Fargo this weekend.

“I was ashamed for my people,” said the Bismarck man who knows the situation has improved since those days in the late 1990s and early 2000s.

Yet he still worries. He took his address off one of the pamphlets explaining the mission of the organization after he learned of the racist and anti-Islam graffiti spray-painted on the Moorhead Fargo Islamic Center mosque last month.

“I didn’t want to wake up some morning and find my garage door spray-painted,” Red Bird said.

Red Bird explained Two Spirit as “people having both a male and female spirit within them and are blessed by their Creator to see life through the eyes of both genders.” He said the term has been present for countless generations, although different tribes use other phrases.

He noted that a Two Spirit person isn’t necessarily gay.

The Two Spirit Society’s vice president Will Little Owl, of Fargo, said he was more fortunate growing up on the reservation and wasn’t harassed, perhaps in part due to his protective family.

He said his accepting family called him “special.”

Little Owl believes life on the reservation for Two Spirit people and those in the LBGTQ community has improved, especially among the younger generation.

Acceptance is still far from universal on the state’s five reservations.

“I think the older generation has a more difficult time, which could be because of the religion that was forced upon them,” Little Owl said.

Tracie Wilkie, an ally who “walks with” with Two Spirit people and serves as secretary of the organization, is all too familiar with the “high levels of violence” and high suicide rates gay people experience from her years working in the criminal justice system.

Although most of her career was spent in Oregon, she is back in North Dakota and points to the actions of the state Legislature as an example of affronts to the LBGTQ community.

Another example of the controversy that still exists was exemplified last year on her home reservation, Turtle Mountain in the northeast part of the state, where a decision was made to recognize same-sex marriages. It was far from unanimous.

Growing up there, Wilkie found the community full of acceptance and respect. She said her classmates were “like siblings.”

Brought together through unique journeys, the three organizers see the need for the society with its mission to “educate, support, improve health care and preserve Two Spirit and LGBTQ history and activism.”

Little Owl said he secured the help of some mental health nurses for when the group begins referring those in need to services, and Wilkie is working on acquiring other health-related services that people can use.

There are other organizations in the state that work specifically on supporting LGBTQ residents and tackling issues, including the Fargo Pride Collective and Community Center and Dakota OutRight in Bismarck.

“This is just another awesome way to bring awareness” to LBGTQ and Two Spirit people, Wilkie said. “We want people to wake up and see that all human beings should have the same rights.”

Little Owl sees the organization as helping Native Americans and others in their journey of knowing they can be accepted and have emotional support and care available.

Red Bird said the organization’s flag and symbol colors represent multiple cultures to show that all are welcome in the organization. The colors are white for Caucasians, yellow for Asians, black for Blacks and red for Native Americans.

“I want us to be a bouquet of humanity by combining all four cultures in the society,” he said, adding he didn’t want the organization to show signs of being “segregated” as is seen in so many places in the nation.

The group, waiting on its nonprofit status, is hoping to have a website and office in the coming year and is planning to hold events such as another kickoff event this fall in Bismarck, a pow wow and even a gay rodeo down the road to raise visibility.

It joins several other Two Spirit societies around the nation, including those in Minneapolis, Denver, Montana, the San Francisco Bay Area and New York City.

North Dakota’s Two Spirit Society & Allies is planning a drag show at the Biltmore Hotel & Suites at 3800 Main Ave. in Fargo this Saturday, May 15, with social hour starting at 7:30 p.m. and the show at 9 p.m. until midnight. There is no charge, but free will donations will be accepted. Seating is limited.

Officers of the organization will be introduced at the event, which also includes the crowning of Miss North Dakota Indigenous Two Spirit and an impromptu selection of Mr. Leather North Dakota. Performers, including a few Native Americans, are coming from Minot, Belcourt, Grand Forks, Minneapolis and Fargo.