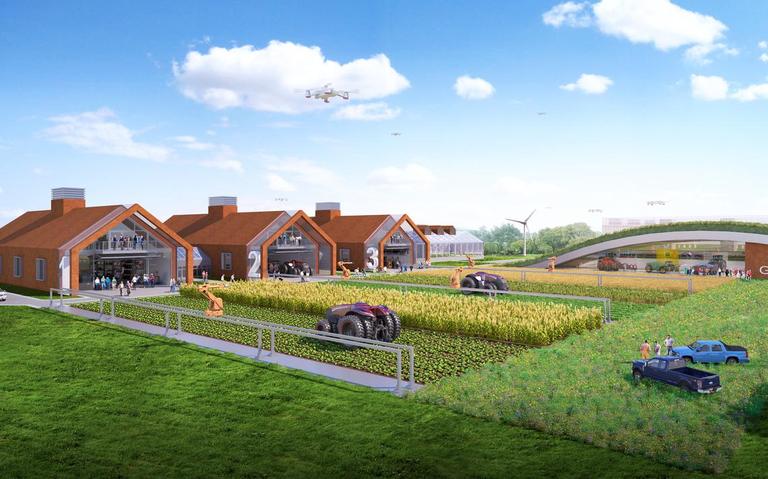 N.D. – Grand Farm launched in 2017, after a speech by Fargo-based agricultural entrepreneur Barry Batcheller, who urged the emphasis of a “major” focus for the region to continue its long-standing agricultural technology leadership, led by luminary companies such as Titan Machinery, Bobcat and Steiger Tractor Co. The company says it provides a “neutral platform” for projects and demonstrations, designed to “energize collaboration” among businesses, organizations and researchers.

Brian Carroll, director of the Grand Farm Education and Research Initiative, testified that the effort is successful, and described projects and connections with federal priorities.

Others testifying in the hearing were experts on innovation and agriculture, including Sandhills AGInnovation Center, Ellerbe, N.C.; the Center for Dairy Research and the Wisconsin Cheese Makers Association, both of Madison, Wis.; and Land O’Lakes Inc., of Arden Hills, Minn.

Sen. John Hoeven, ranking Republican on the subcommittee and its former chairman, praised Grand Farm for bringing together partners to build the growing “technology sector with our long-standing leadership in production agriculture.” Hoeven said Carroll’s insights would help “ensure federal support” for projects like Grand Farm and “further advance the next generation of precision agriculture.”

Carroll told senators that Grand Farm this summer intends to apply for USDA programs, including the Rural Innovation Stronger Economy (“RISE”) program. The grant application would accelerate private investments of corporate partners and to “start building a long-term campus” for the Grand Farm.

“It is our vision to have an innovation center surrounded by demonstration fields, research plots and creative spaces for startups and entrepreneurs to identify challenges and work collaboratively to find solutions,” Carroll said.

Grand Farm, “energized by Emerging Prairie,” is designed to “accelerate the research and innovation into technology which will be present on the farm of the future,” he said. He noted that Microsoft in 2020 invested $1.5 million over three years in the project.

The Grand Farm includes five “strategic pillars” that already have fleshed out in various ways:

Sen. John Hoeven, R-N.D., is all smiles after riding in the new North Dakota Department of Transportation’s autonomous impact protection vehicle at the Grand Farm site south of Fargo on Thursday, Oct. 8. David Samson / The Forum

Carroll noted Grand Farm officials have met with executives of Kratos Defense, American Crystal Sugar, Transystems and CHS and have discussed “substantial workforce shortages in the sugarbeet industry” and are “planning for a pilot of an autonomous truck during the fall 2021 sugarbeet harvest.”

Carroll noted that Emerging Prairie in 2020 was awarded a $50,000 Rural Business Enterprise Grant from USDA Rural Development, to establish the “formal entity” of Grand Farm.