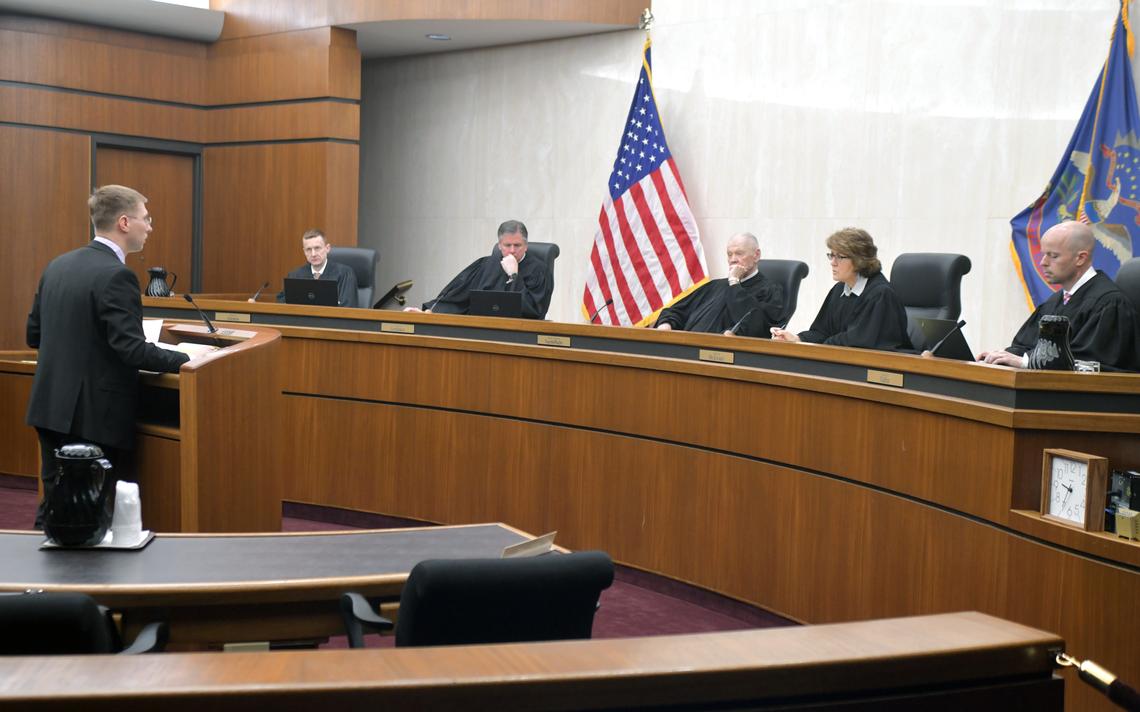 BISMARCK, N.D. — The North Dakota Supreme Court sided unanimously with the state Thursday, May 20, in a test of Gov. Doug Burgum’s authority to temporarily restrict businesses as a public health measure during the COVID-19 pandemic.

The case stems from a dispute over the operations of a Minot nursing home’s in-house hair salon during the early months of the pandemic, when an executive order issued by Burgum restricted operations of many businesses and instructed salons and barbershops to close.

District court judges last fall ruled against Kari Riggin, an independent contractor in Minot’s Somerset Court assisted living facility, in related civil and criminal cases over her continued operation of the nursing home’s salon under the executive order. Riggin appealed those decisions up to the state Supreme Court.

And on Thursday North Dakota’s high court sided with the state in criminal charges against Riggin for defying the governor’s executive order. In an opinion written by Chief Justice Jon Jensen, the court said Burgum “did not exceed the statutory authority delegated to him” during states of emergency like the pandemic, and found that Riggin failed to adequately support claims that the governor’s executive order was an unconstitutional restriction of private business operations and unconstitutionally broad in its mandates. The court also upheld North Dakota laws outlining the governor’s authority during states of emergency, finding that they do not violate separation of powers between the executive branch and the Legislature.

Lynn Boughey, an attorney representing Riggin, said in a statement Thursday that the state Supreme Court “sidestepped most of the constitutional arguments we made” by “claiming we were not specific enough” about what made the executive order unconstitutional. “Obviously I believe we presented sufficient arguments in that regard,” Boughey said.

Burgum issued an executive order in March of 2020 restricting the operations of many state businesses, including restaurants, gyms and personal care facilities like salons. The governor allowed the business restrictions to lapse at the beginning of last May, but Riggin’s salon continued operating into April in violation of the executive order. The infraction carried a maximum possible fine of $1,000. Boughey said Riggin paid a $100 fine as part of a conditional guilty plea that allowed her to appeal the criminal case up to the state Supreme Court.

A spokesman for the governor’s office did not immediately respond to a call from The Forum seeking comment on the ruling.

Riggin elevated both a civil lawsuit and a criminal charge to the state Supreme Court last fall. The civil case was resolved in March, when the judges agreed with a district court ruling that had dismissed those claims as moot because the executive order was no longer in effect.

Boughey said in the statement that “there is a strong likelihood” that his side will appeal their case up to the U.S. Supreme Court, where he predicted that “it is quite possible” the justices would “have a different opinion as to whether the government can entirely take away someone’s livelihood.”

Three appointments to the U.S. Supreme Court by former President Donald Trump in the last few years have given the court a strong conservative and business-friendly leaning, though the nation’s highest court is extremely selective in the cases it chooses to hear.

Will the checks from the government ever stop?