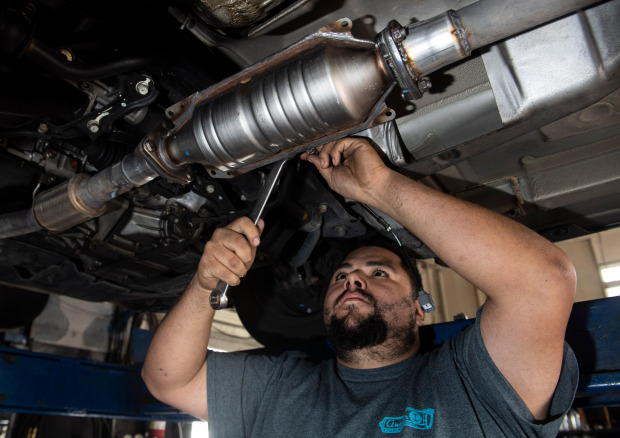 MINOT, N.D. – Local authorities are teaming up with auto shops around the city to help deter the theft of an important car part.

The Ward County Sheriff’s Department reports an increase in catalytic converter thefts in the area.

To help combat thefts of catalytic converters, their team of mechanics will now engrave your license plate number on to the part.

“When they take them to the recycling plants they can see the orange marking and engraving and hopefully be able to tell that they’re stolen,” said Assistant Manager Cameron Moe.

Northwest Tire is one of five local businesses partnered with the Ward County Sheriff’s Department that will engrave the part for free when you bring them in for service.

The other four are Tires Plus, Westlie Ford, The Muffler Shop, and Minot Automotive Center. Investigators like Dept. Taylor Schiller said a number of thefts go unreported.

“On our end it’s very difficult to trace that back. Once it’s out it’s hard for us to find that specific piece to fit it back in because there’s not really a lot of ways that you can trace to that specific vehicle,” said Schiller.

Mechanics at North West Tire said they will continue providing the service for the foreseeable future.

“We’ll ask all the customers when they come in if they would like us to do it or if they want to come in and ask us to do it we’ll do it then as well,” said Moe.

Protecting the community one service at a time.

Schiller said the department has also alerted local recycling plants to the markings so they can call in if they think a part is stolen.

The Department is also asking people to text in tips to 847-411 and using the phrase NDWARD to help stop these thefts.

House fire breaks out Monday in Minot, no one hurt