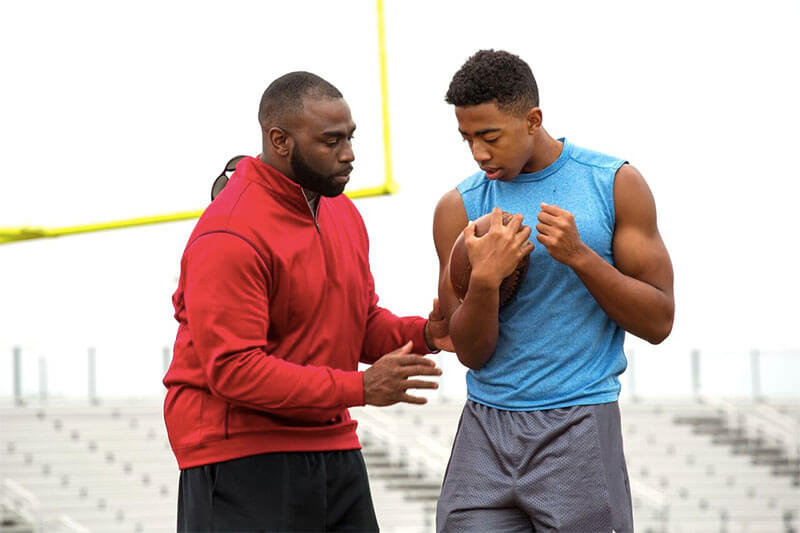 MINOT, N.D. – Brody Myers decided he wanted to take his career out of the clinic and put it in the weight room and on the field.

He’s bringing some business skills with him.

Myers currently works as assistant health conditioning coach for Heilman’s Performance, and is contracted to work at Minot State University and Minot High School. He graduated thrice at the university, first with a bachelor’s degree in athletic training in 2017, and then with a bachelor’s in corporate fitness in 2018, and most recently with a master’s in sports management this past spring. Along the way he learned some of the same skills that leaders in other businesses apply, such as communication, leadership, and organizational skills.

Myers is determined to bring his best efforts to the athletes with whom he works. As he does, another aspect of business — this one in branding — may serve him well down the road.

“I think one of the most important business skills that I learned in my time as a Minot State University student is the importance of branding,” he said. The school’s athletic department wanted a unified presentation of MSU athletics and has done more branding recently. “Some things that have been implemented thus far is one unified logo across all athletics, having program-wide themes, and one central hashtag for all athletics. All of these seem like simple changes, but because every athletic team uses all of these things, it creates a sense of togetherness among the department and shows a unified front to the community.”

Originally from Murrieta, Calif., Myers received a scholarship to Minot State University in 2013. Along with the coursework and field hours, and a number of games in between, he achieved a level of success that has only deepened his drive. This is only the beginning for this young man with tattooed sleeves. He wants to be an effective leader and, being an athlete himself, shares some perspective. He knows he cannot brainwash his charges.

“I think effective leadership is important and is something I could bring,” he said. “I think, especially in coaching, you have to be able to lead. Athletes are really good at sniffing out the BS that coaches could potentially be telling them. Athletes live in a different sort of bubble, I think, and if something feels wrong to them they’re really quick to understand that.”

Only this year did he become a full-time salaried employee at Heilman’s Performance, but he’s already applying the skills he’s learned in school. On the job experience also is a great teacher and he continues to learn from his coaches, the athletes, and life experiences. One of his focus points while at Minot State: velocity-based training, something he remains excited about.

“I came across velocity-based training, which is essentially measuring how fast athletes move a barbell. Then you use that information to determine what weights to put on the mark, depending on whatever the goal is,” he said. “It was a concept that really interested me, because in the weight room it’s tough for a strength-conditioning coach to eyeball an athlete and say whether or not his moving the bar fast enough; that’s completely subjective. With velocity-based training there is objective feedback. …

“I got into it going into my last year of school, and then I was able to turn that passion into my science experiment with our football team here at Minot State. That meant looking at the effects of velocity-based training on the athletes. It’s something I think will take a little time for our athletes to get used to, but there have been some who have been consistently using it since last winter. … The athletes that have been using it consistently have seen a drastic change in how they move and act athletically. But it’s so hard to quantify without somebody seeing the difference, because they’re getting bigger, faster, and stronger at rates we would not have been able to do, I think, without this system.”

Myers said strength and conditioning is a growing career option and is even starting to be recognized as a science-driven, health-centered profession that encourages qualified professionals to join the field.

“The biggest challenge follows suit with that; strength and conditioning used to be very basic in nature and was not backed by much scientific research,” he said. “Now that it has grown throughout the years, science drives new innovations. And while that’s a good thing to progress the profession and the athletes that it’s impacting, it also makes it difficult to stay on top of all the new scientific trends if you’re not paying attention to the new studies. If you don’t pay attention to the trends, you won’t progress as a professional and your athletes could suffer athletically as a result.”

Myers said his biggest contributions to the school and his chosen field of study and pay is his passion for athletics, his increasing knowledge about his profession, and his excitement about velocity-based training.

“I like it a lot. I like the city, I like the people,” he said. “Some people back home are like, why do you like it so much there, it’s so cold? Well, that’s a fair point. But the kindness of people here is different; random people will genuinely be interested in your day and how you’re doing. … I’ve had 10-minute conversations with grocery store clerks at the cash register.”

For now he is enjoying his position with Heilman’s at the university and high school and continues to look forward to working with athletes, now and in the future.

His advice for those considering pursuing the same profession: “Obviously, get as much as experienced as possible, as soon as possible. I don’t know if it was necessarily told to me or not, but that’s one thing I have learned,” he said. “Be proactive in trying to learn more about the profession and not being afraid of stepping (sharing your viewpoint). The more experience you can get, and quicker, I think, the better. … I have six years of experience now with dealing with college athletes in some capacity, either in the athletic training room or in the weight room and coaching them. I think that experience has helped me be the professional that I am today.”