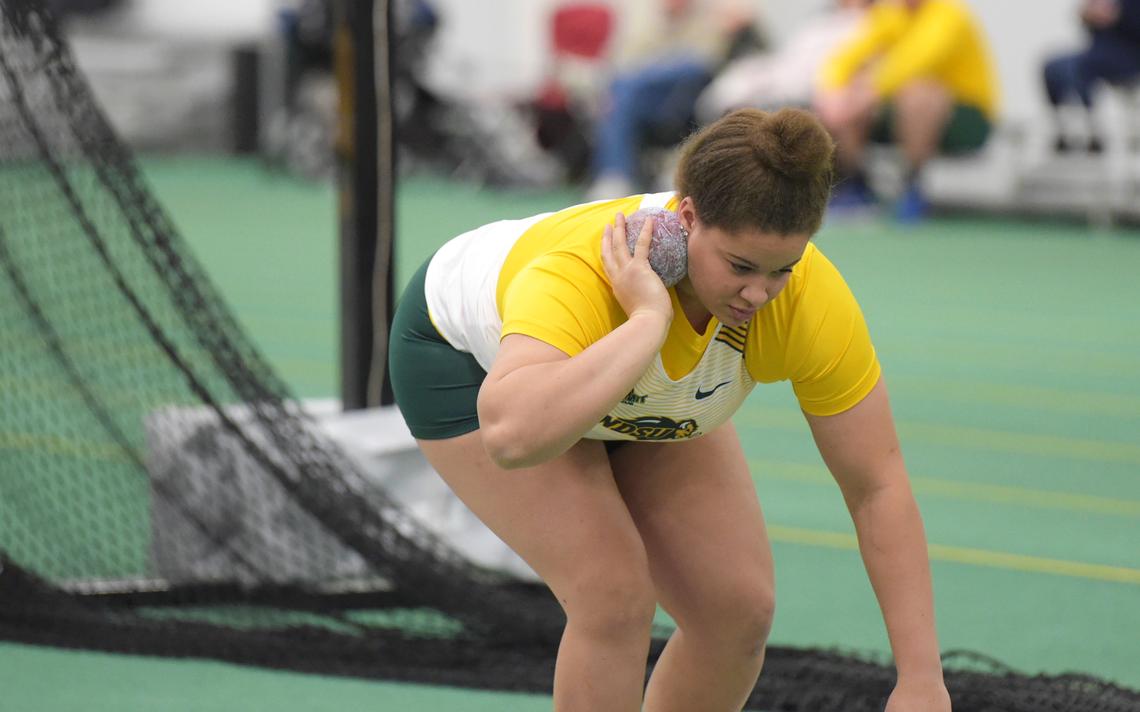 FARGO, N.D. – When you look at the banners hanging in the Shelly Ellig Indoor Track track facility at NDSU, there is one name you’re going to see a lot of. Akealy Moton is continuing to establish her legacy as a Bison thrower. The Sophomore from West Fargo is already having a stellar outdoor season. She is currently ranked second in the nation, and has already shattered her own school record twice. Her most recent record throw was in the comfort of her own track, throwing the Shot Put 17.79 meters.

“I always like home meets more because my family lives here so that’s really nice to have your family around.” Moton said about competing at home. “And the atmosphere from the home meet is always so much different. It’s always more electric.”

The opportunity to compete at her local school is not lost on Moton. In a special moment in the Bison Spring Classic, she broke the school record in front of her family.

When we asked about having her family at the event, Moton said, “That’s really my support group. That’s my rock. They know that. Having them there is always a lot more fun.”

Despite all the success and accolades she’s collected, Moton hasn’t slowed down at all and is training harder than ever as she continues to shatter records.

“I try to take it one goal at a time. So right now the goal is nationals.” Moton said, “And then from there thinking of the next goal. I don;t try to think of all of them in a whole, at one time because that can be overwhelming so.. I take it one at a time.”

She also recognizes that competing this close to home puts a lot more eyes on her. It also gives her the opportunity to inspire more local athletes.

“It’s always a special experience to see the kids that you coach coming to your camps.” Moton told us, “And then them possibly being teammates is nice. :ike, “oh we built this relationship now I get to throw with you instead of coach you. And you really get to see them throw as athletes and people.”

Moton briefly held the #1 spot in the country before she way out-thrown later in the weekend. Time will tell on how this already historic season shakes out for this newest throwing phenom at NDSU.