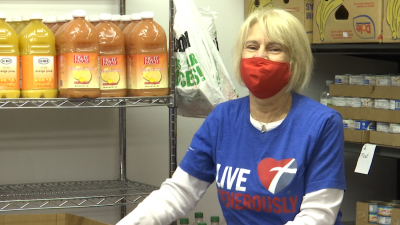 “It’s what I love to do!” Vickie Phippins said.

Phippins has spent her life giving back to the Minot community. Now, she’s its Citizen of the Year.

While working at the Air Force base, she also spent 20 years volunteering at the Domestic Violence Crisis Center.

“Just knowing that we’re helping people that are at their lowest point and a lot of them don’t even want to ask for help and I just think it’s something I want to do,” said Phippins.

After retiring, she started volunteering with the American Red Cross.

Her daughter was involved in the flood and remembers how the Red Cross helped them in their time of need.

“Hopefully, they’ll remember it for years and want to do something in their future as well,” Phippins said.

She also spends her days volunteering at the Lord’s Cupboard Food Pantry and helping out at the pantry’s garden.

Roise and Phippins have been on several mission trips over the years to places like El Salvador to build homes.

“It’s like a high, a great high just to know that you’re going to make a difference in their lives,” said Phippins.

Minot Mayor Shaun Sipma shared why exactly she was chosen as Minot’s 2021 Citizen of the Year.

She was nominated by her daughter and granddaughter.

They were hoping Vickie’s story would inspire people to help others — and that her kindness would become infectious.

“I don’t like the spotlight but I think it’s a good thing because then maybe others will get the same ideas that they’d like to help as well. I mean, it’s fun. It’s an adventure. Everything I do is either an adventure or fun or I probably wouldn’t continue doing it,” said Phippins.

Phippins says she’s grateful for her health and hopes to continue volunteering and giving back for the rest of her life.

Being chosen as the Citizen of the Year also meant a $1,000 charity donation in her name. She chose the Lord’s Cupboard.

’Truckers Against Trafficking’ take knowledge to the road