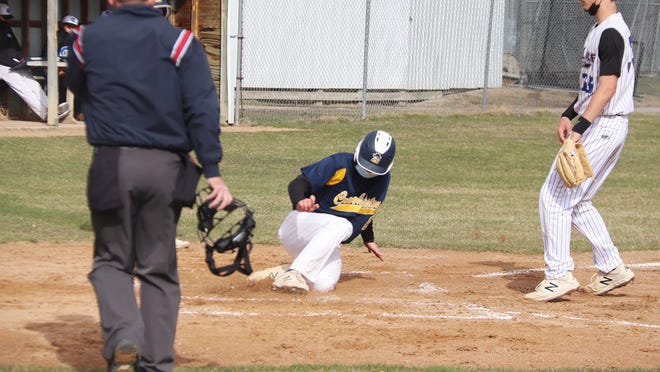 MINOT, N.D. — Jacob Miller strode into the on-deck circle, looked down to check his bat and realized, to his surprise, that he had forgotten his batting gloves. The senior right-hander sprinted back to the dugout to retrieve them.

It’s understandable that Miller’s mind slipped. He probably hadn’t been expecting to make a second trip to the plate in the top of the first inning.

Batting around is rare enough, but Miller was hitting sixth in the Crookston order. When Miller stepped into the batter’s box, the Pirates already held a 10-0 lead over Red Lake County.

Even more unusual than batting around, bringing 15 hitters to the plate or putting 10 runs on the board in a single inning? Doing so on just three base hits.

The Pirates took advantage of a slew of Rebel miscues instead, piling on all they would need and more in the initial frame. The big first inning highlighted a 14-1 run-rule victory over Red Lake County Friday afternoon at L.E. Drechsel Field in Crookston’s first game in nearly two years.

Like every team in Minnesota, the Pirates hadn’t taken the field since 2019. But perhaps they were a bit more anxious to get out there than most. They had been scheduled to open their season at Win-E-Mac last Thursday, but that game was postponed due to rain. Games against Thief River Falls and Park Rapids this week also went by the wayside due to weather.

Before the game began, Crookston coach Mitch Bakken reminded his team of this. No reason you shouldn’t be exhausted afterwards, he told the Pirates, imploring them to bring energy and enthusiasm on the field and from the dugout.

“We have a pretty quiet team, but they were talking, that’s what we wanna see,” Bakken said. “They did things right, took advantage of the mistakes and just kept their foot on the gas.”

RLC quickly lost control. Hince hit Carter Bruggeman and Ashton Larson on consecutive at-bats and threw three more wild pitches before being pulled just 11 hitters into the game. Ten of those 11 hitters had reached base, five doing so on walks. Eight had crossed the plate. Hince didn’t get any help from his fielders, who committed three errors in the first inning and five in the frame.

“They gave us some, but we definitely forced them into situations where they needed to make plays,” Bakken said. “They made some mistakes and we capitalized.”

Big innings sometimes come with a cost. Any inning lasting as long as Crookston’s first inning did — over half an hour — can throw off a pitcher’s rhythm. Miller tried to counteract the long delay by throwing an extra bullpen session when his team was at the plate.

But Miller struggled to spot his pitches at first. He gave up two base hits, walked a batter and hit another, allowing the Rebels to score their lone run of the game. Miller struck out Carter Williams to end the inning, but needed nearly 30 pitches to get out of the jam.

“We talked to him about that, maybe trying to mess around a little bit too much,” Bakken said. “I think he was trying to work some pitches. But if you’re missing, especially in the first game of the year and you’re up by 10, just go throw strikes.”

That’s what Miller did over the next three innings. He got stronger as the game went on, according to Bakken, hammering the zone and putting down RLC hitters with ease. Miller struck out 10 of the 19 batters he faced and gave up only one hit after the first inning, finishing with under 80 pitches thrown.

“I haven’t pitched in a long time,” Miller said. “It’s kind of tough to get back into it right away, but after the first inning it felt really good. … It helped a lot to have that lead. You think a lot less, you don’t have to worry as much.”

While the Pirates found offense harder to come by as the Rebels settled down on defense, Bakken thought their approaches at the plate improved. Instead of chasing recklessly, Crookston patiently waited for its chances, like Brooks Butt did in the third inning when he drilled a three-run home run over the left-field fence to make it 13-1.

“When you have a big lead, you can go up there and try to do too much,” Bakken said. “We sat back and let the game come to us, and I thought our approaches and at-bats were really good for the first game.”

Butt went 2-for-4 with five RBIs, while Gunderson went 2-for-2 with two walks and crossed the plate four times. After Miller’s mostly dominant outing, Bruggeman came in and made short work of Red Lake County with a 1-2-3 fifth inning to end the game.

“We did little things right, and you can build off of that,” Bakken said. “You gotta start somewhere, and this was a good game to start.”