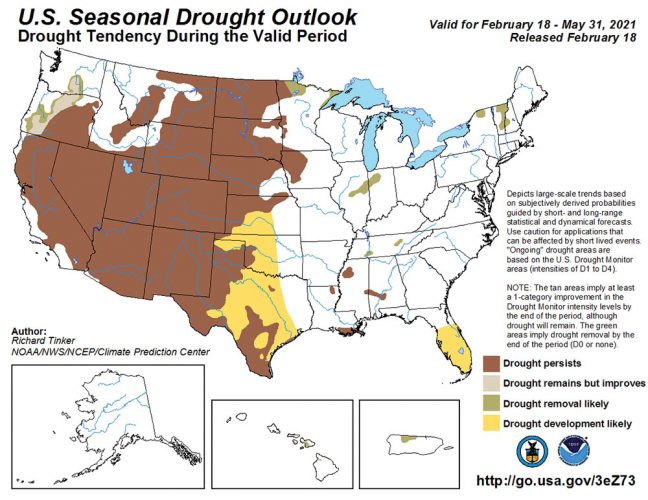 MINOT, N.D. – A Drought Briefing issued by the National Weather Service Wednesday cautions that current drought conditions across North Dakota are likely to “persist or worsen” well into the summer months. The NWS adds, “It is always possible we could have a pattern change and transition to a cooler/wetter pattern, but there is no indication of that happening.”

North Dakota has been drying out for several months but, with the growing and planting season getting underway, the lack of soil moisture begins to become more and more evident. Further degradation of soil moisture conditions is of increasing concern, particularly to farmers and ranchers.

The Minot area is at the epicenter of what the Drought Monitor rates as “extreme” drought conditions with less than average precipitation for 11 of the past 13 months. As of Wednesday a mere 0.08 of precipitation for May was recorded at the North Central Research and Extension Center south of the city. The May average is 2.50 inches.

Still to come is the wettest average month in the region, June, with an average rainfall of 3.58 inches. With minimal to no soil moisture available in most areas to germinate crops and boost pasture growth, timely rainfall early in the growing season becomes more important than ever this year. But there are other developing concerns regarding drought conditions too.

Below normal rainfall, says the NWS, “reinforces the expectation for lower water quantity and quality in wetlands, small lakes, and stockdams” and “it would take an extended period of above-normal rainfall to bring the region back to near-normal hydrologic conditions.”

Reservoirs, lakes, rivers, and streams throughout the state are showing increasing signs of on-going drought. Lake Darling is nearly two feet below its summer operating level with virtually no water entering the reservoir. Its release gates are closed in an effort to conserve water. There is no measurable flow in the Souris or Des Lacs Rivers. Lake Metigoshe is low. Even sprawling Lake Sakakawea, which receives flows from both the Yellowstone and Missouri Rivers, is forecast to experience one of its lowest runoff seasons in history.

The spring fire season has already seen thousands of acres burned across the state, mostly in western North Dakota. Fire conditions have been ideal across the landscape where snow cover was very light. The NWS cautions that an active spring fire season is expected to continue and “if drought conditions persist into summer, new season grasses may cure early leading to an earlier than average summer/fall fire season.”

According to weather outlooks issued by the Climate Prediction Center, it appears that this month may be the best bet for precipitation for the next several months. In their Drought Briefing the NWS says, “There are equal chances for above, below, and near-normal temperatures and precipitation during May.”

Night one of the Minot Police Department’s Citizens Academy