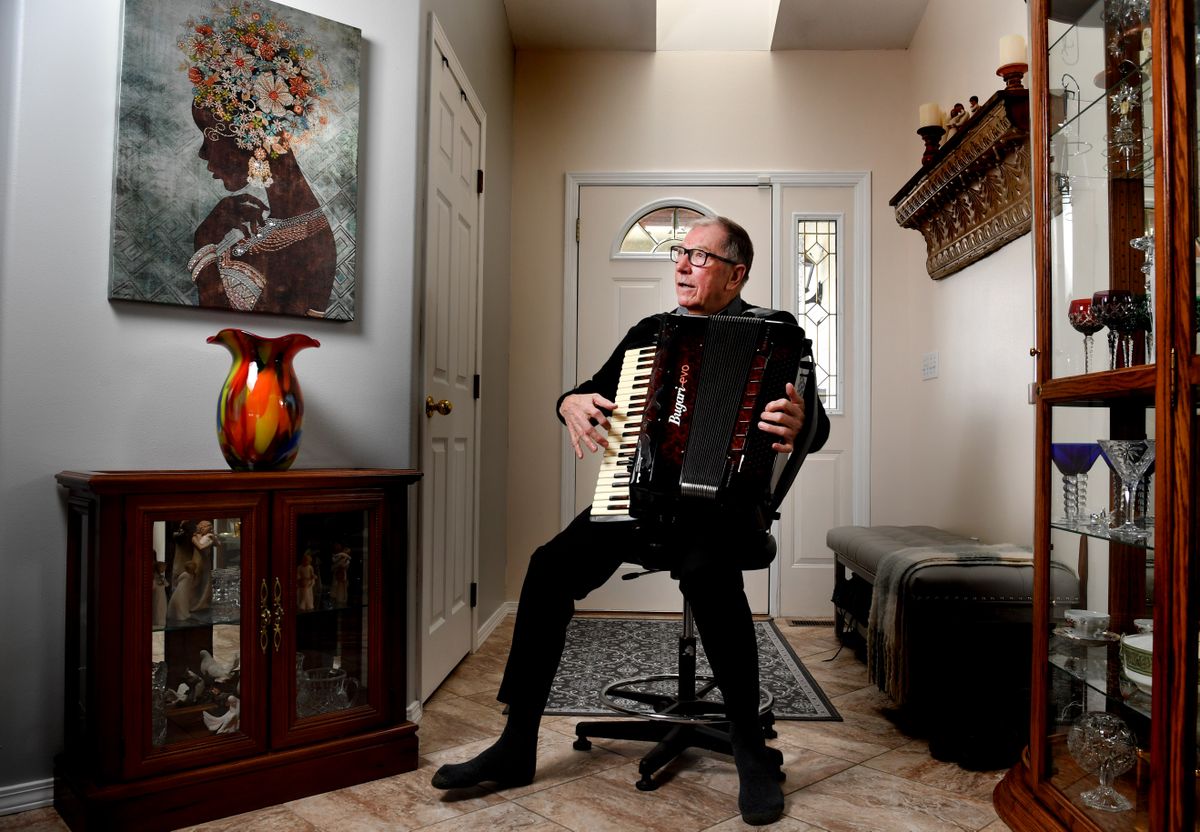 N.D. – Born and raised in a North Dakota town not far from Lawrence Welk’s birthplace, Norm Seeberger, 78, says he was indoctrinated into accordion music.

“My oldest sister bought me a toy accordion with only eight buttons on the right hand,” he recalled.

When his father saw his dogged determination to coax tunes from the toy, he purchased Seeberger a real instrument and arranged for music lessons from a nun.

“She tried to teach me, but I had a hard time reading the notes,” he said. “I played by ear. After a month she gave up and said, ‘I can’t teach you, you have your own way of playing.’ ”

The music lessons didn’t take, but his lifelong love of the accordion never waned. Until COVID-19, Seeberger played twice a month for the German American Society, and regularly played at area retirement facilities. In addition, for many years his band played for Sunday afternoon dances at the North Side Eagles club.

Quiet and reserved without his instrument, Seeberger quickly discovered he enjoys playing for a crowd.

“I took my accordion to school and played in front of the class,” he recalled, and from there his musical reputation grew.

“We had a prom in high school and they were playing records,” he said. “It got to be boring, so they asked me to go home and get my accordion. I think that was the first time I played music for people to dance to.”

His most unusual gig was the center of a boxing ring, where he played between bouts.

The birth of rock ‘n’ roll tempted him to switch to guitar like his two older brothers.

“But the accordion was the instrument for me, so I stuck with it,” he said.

Following the tragic death of his father and brother in an industrial accident, Seeberger, a then recent high school graduate, moved to Spokane, where a sister and another brother had settled.

He served in the Army for three years, taking his accordion with him.

The accomplished accordionist entered and won the first round of a talent competition at Fort Sill, Oklahoma. He moved on to the next round at Fort Hood, Texas. Seeberger didn’t win, but one of his competitors was Guy Hovis, a singer who went on to enjoy a lengthy gig on the “Lawrence Welk Show.”

After returning to Spokane, Seeberger attended Eastern Washington University, and became an accountant. However, he didn’t pack his accordion away. Instead, he formed his first band with a drummer and his older brother on guitar.

The Hi Steppers played at dances, weddings and anniversary parties all over town. And since 1961, Seeberger has played twice a month for the German American Society at Deutsches Haus, frequently accompanying the Society’s Concordia Choir.

His repertoire expanded from polkas and waltzes, to Latin, Western and even a little rock ‘n’ roll.

In 1995, the band that played for the Sunday dances at the Eagles club decided to play for snowbirds in Arizona. A friend told Seeberger about the opening, and he put a new band together. Over the years, many local musicians have played with him, including bass player, David (“Jim”) Hess.

“My husband was very outgoing, and Norm is reserved,” she said. “But he beams from ear to ear when he plays.”

She recalled a time they both dressed in lederhosen.

“At their age, their legs were NOT pretty,” said Hess, laughing.

Seeberger’s gig at the Eagles ended in June 2019, as the regular crowd had diminished due to age or infirmity.

“Norm really made a lot of people happy,” she said.

One of those people, Jane Webb, rarely missed a dance.

“We loved to polka,” she said. “Everybody was happy when Norm was around. If you weren’t having a good day, you were by the time you left.”

Seeberger longs to perform again and said local musician Geraldine (Geri) Wagner is ready to join him on stage.

Several years ago, he purchased a versatile digital accordion that makes 101 sounds, and the musical expression he’s found in working the bellows still intoxicates him.

“I’m not tired of playing ‘The Beer Barrel Polka,’ ” he said. “After thousands of times, it’s still enjoyable to play.”

While he plays at private parties and smaller gigs, the joy of performing for dances hasn’t waned, though the dances have diminished.

“There’ so much going on, you kind of lose yourself,” he said.

He doesn’t think the accordion will make a comeback, though. When he played an Oktoberfest gig at Northern Quest, he said there were young people who approached him and didn’t know what the instrument was.

For Seeberger, the amount of feeling and expression he puts into the accordion can’t be replicated any other way.

“There are times I can’t sleep at night, and I’ll get up at midnight to play,” he said.

Mac Schneider could be considered for U.S. Attorney of North Dakota