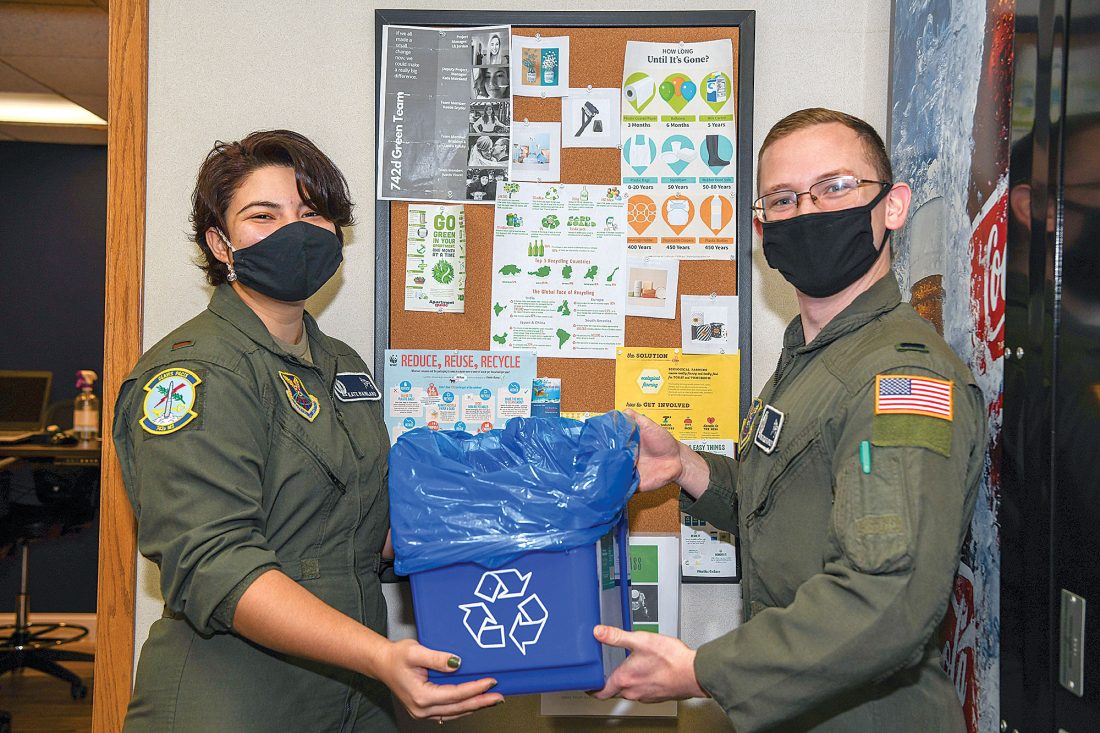 MINOT, N.D. – Reduce. Reuse. Recycle. These are some of the topics spoken about during an interview with two airmen about an initiative in its infancy at the 742nd Missile Squadron at Minot Air Force Base.

Recycling has become a hot topic at the 742nd Missile Squadron, thanks to 1st Lt Elizabeth Jordan, 740th MS Minuteman III instructor and 1st Lt Kate Mainland, 742nd MS missileer. The recycling team, or “Green Team,” was begun by Jordan, last August in her own home.

“I am trying to get my household down to zero percent plastic use, which is hard to do,” said Jordan. “I realized that the majority of my plastic use is at work or getting groceries. I thought I don’t know why I’m making this about myself when I could make this a bigger initiative and take it into my workplace as well.”

Seven members now make up the recycling team at the 740th MS, where they provide multiple avenues for recycling for their squadron, including three bins to separate recyclables and an option to bring in unique items for recycling. Kate Mainland will soon undertake the responsibility of leading this team once Jordan has left.

As of now, the Green Team collects a variety of items eligible for recycling and brings them to the appropriate recycling center or mails them in via a mail-in recycling service. The items they collect range from shredded paper, cardboard, plastics, aluminum cans and even razors. The challenge, however, aside from educating base populace of the need for recycling, has been where to recycle these items.

“The Air Force used to do recycling all the way through 2016 when I got to my first base at Moody. We were still recycling per the Air Force,” Jordan explained. “Then I think the programs got too expensive and they stopped. There is no actual recycling program here in Minot.”

The Green Team currently transports its recycling haul to either Glenburn, Jamestown or Bismarck for processing, which for one of those centers is a three-hour drive.

“The City has been discussing implementation of a recycling program for the better part of a couple years now. The City is missing some critical pieces of infrastructure that would need to be in place before a program could begin,” said Jason Sorenson, City of Minot assistant director of Public Works. “The next step would be to design a transfer facility and I plan on bringing an engineering task order to council before the end of the year to see if they want to move forward.”

Jordan and Mainland creating and leading the Green Team have spoken volumes to the success of what two airmen, with help from their team, can do in their own offices in terms of creating an environment where sustainability and recycling are commonplace. Their goals are soon to be able to host one or two days a month where anyone can bring their recycling to the squadron, no matter the amount or type, and the Green Team will take it to the facility to have it processed. Another goal is to create a composting center on base and even a community garden to foster knowledge of these topics.

“Do what you can,” said Mainland. “I know everyone’s busy, I know COVID’s hard on people, but doing what you can when you can is super important. Taking advantage of opportunities like squadron green teams is a great first step in learning how to recycle.”

Congress to meet next week to validate election results

Second round of economic impact payments on its way