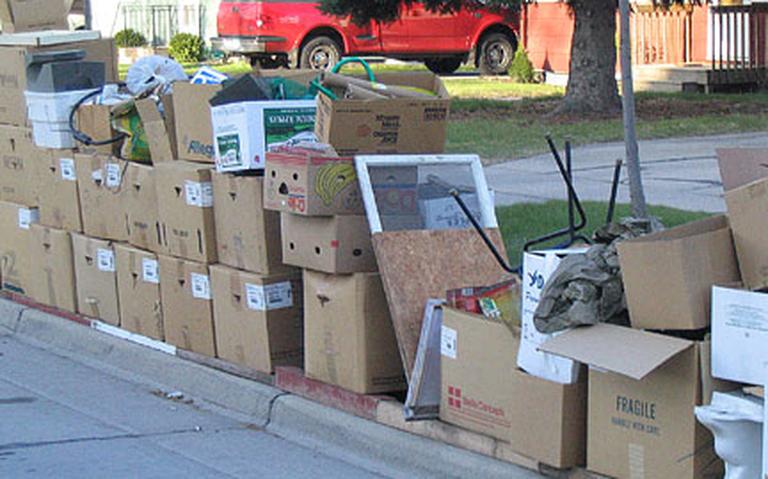 FARGO, N.D. — The annual ritual of Spring Cleanup Week may need a slight name change in Fargo and Moorhead this year.

Both cities have decided to hold two weeks of curbside pickup rather than one. The change aims to limit risk of spreading the coronavirus and cut down on hiring additional staff. It was also noted it was difficult to find day laborers to assist in the massive operations.

The curbside pickup of residents’ unwanted items is an annual community ritual for those looking to cut down on clutter and others hunting for treasure in their neighbors’ discarded goods.

Both of the plans call for picking up trash during the first two weeks in May.

West Fargo is also renewing its spring curbside pickup this year with a one-week cleanup from May 3-7, according to city spokesperson Mattie Hjelseth. That city only uses its public works employees for the curbside pickup and is releasing more details this week.

Last year, Fargo and West Fargo held their curbside pickups in the fall, while Moorhead canceled the event.

In discussing the cleanup plans for this year, Fargo Public Works Director Ben Dow told the City Commission in a letter that the two-week plan will allow for better protection of city staff in the cleanup by limiting the number of day laborers hired to assist city crews. The plan calls for hiring 10 additional workers rather than the usual 30 to 40, which will also reduce the cost.

Dow and Solid Waste Utility Director Terry Ludlum told the commission on Monday night that another problem has been finding enough day laborers.

Ludlow said he tried to find some laborers to help with cleanup at the landfill after last weekend’s windy conditions, but he called two firms and no one was available.

Commissioner Tony Gehrig wondered if the two-week operation would cost more. Dow said he thought it could be done for the budgeted amount.

Ludlow said it costs anywhere from $100,000 to $125,000 for the cleanup, but it’s a bargain for the 20,000 residences in the city, as that comes out to about $5 per year per household for the convenience of the curbside pickup.

Moorhead officials said the two-week schedule will allow the city to complete the work using its full-time staff, lowering the risk of spreading the virus among workers and residents. The recycling schedule to determine cleanup weeks is on the city’s website, where residents can put in their address to see the correct schedule.

If residents already started cleaning their homes and garages and want to toss the unwanted trash, Fargo and West Fargo have free, year-round transfer stations for junk if people have a way to transport it.

Moorhead also has a transfer station at 2727 Highway 10 E., but there are fees.

Fargo’s transfer station opened in January at the landfill’s main offices at 4501 Seventh Ave. N., while West Fargo’s has been open for several years at 1620 Main Ave. W. across from the Red River Valley Fairgrounds.

The only problem with the drop-off sites are that a person needs a way to haul the trash, especially bigger items such as mattresses, couches, furniture or appliances.