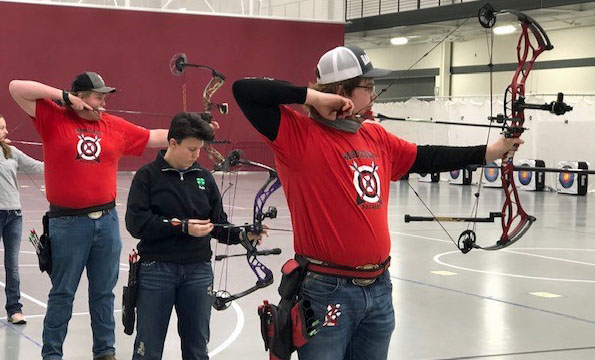 The State 4-H Indoor Archery Match looked a little different this year. Only the top 15 archers and teams from the 2021 archery season were invited to compete at state. In years past, any archer willing to shoot in the state tournament was welcome to attend.

Ward County had 13 archers compete at the state match. The contest was held at Nishu Bowmen Club in Bismarck on April 17. Two scores from the regular season combined with their state match score determined their overall placing.

Indoor archery matches are split into groups based on age and bow type. Ages are Beginner (8 to 10 years old), Junior (11 to 13), and Senior (14 to 18). The Masters division is for those who are at least 14 years old and have qualified for a national contest in their age and bow division. The bow divisions are Barebow, which has no sights or releases and Freestyle, which has either a sight or a release.

Other Ward County participants were:

– Tate Novodvorsky, Douglas, placed 2nd with a score of 890.

– Also representing Ward County were Ethan Johnson and Karter Myers, both from Minot.

– The team of T. Novodvorsky, Brose, E. Johnson, and K. Myers earned second place with a score of 863

– Also representing Ward County was Quade Everson and Ty Murphy, both from Minot.

– The team of Brynlee Bloms, Perdue, Murphy, and Everson are 4-H State Champions with a score of 381.

As the state match awards were rapping up, the committee announced various character awards. Three people awarded were from Ward County. The Most Improved Beginner Barebow Archer award went to Brynlee Bloms and Most Improved Beginner Freestyle Archer award to Ty Murphy. The Clover Award to archer displaying excellent character, willingness to help, and is trustworthy throughout the archery season went to Karter Myers.