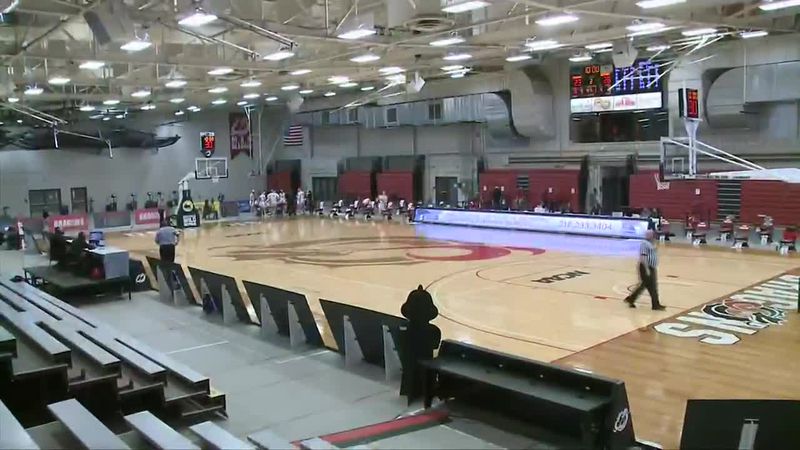 N.D. – There is something big brewing in Enderlin. The Eagles Boys Basketball team got off to a hot start this season, winning 10 of their first 11 games. One aspect that sets this group apart from their Class B counterparts, their front court made up of the 6 and a half foot tall Carson Bartholomay, and Gus and Joe Hurlburt, twin brothers checking in at 6′8″ and 6′10″ respectively.

“You can’t really ask for much more coming out of Enderlin… Or North Dakota in general.” said Bartholomay, “Just having three guys all 6′6” plus going up. It’s going to be tough.”

“Most teams don’t even have a guy that’s 6′6”, so to have three guys over 6′6″ it really helps us offensively and defensively too. It’s kind of a matchup nightmare.” Gus Hurlburt said as the team was preparing for practice.

Enderlin has taken full advantage of their height. They sit at 10-3 overall this year, with a 5-1 Region record.

Joe has been turning heads for quite some time now, collecting Division 1 offers from several programs including Minnesota, Ohio State and Nebraska among others. He says that one reason he’s been able to shine is the trust he has in the players around him.

“It’s really special. We’ve been playing together ever since we were kids so we kind of know each other’s games. It really helps us out there.” Joe said.

“We have a really good connection we’ve been playing since we were kids so I think we know what we’re going to do.” added Gus, “And we compliment each other super well. We’re not the same player.”

Another aspect that makes this group special is their age. All three of the Enderlin big men are underclassmen, meaning they still have time to develop.

“We started young and now they’re getting to be a little older.” said Head Coach Calvin Kraft, “They’re still not old, just older. There’s still some things to learn but they’ve really matured. They really feed off each other and make it difficult for other teams.”