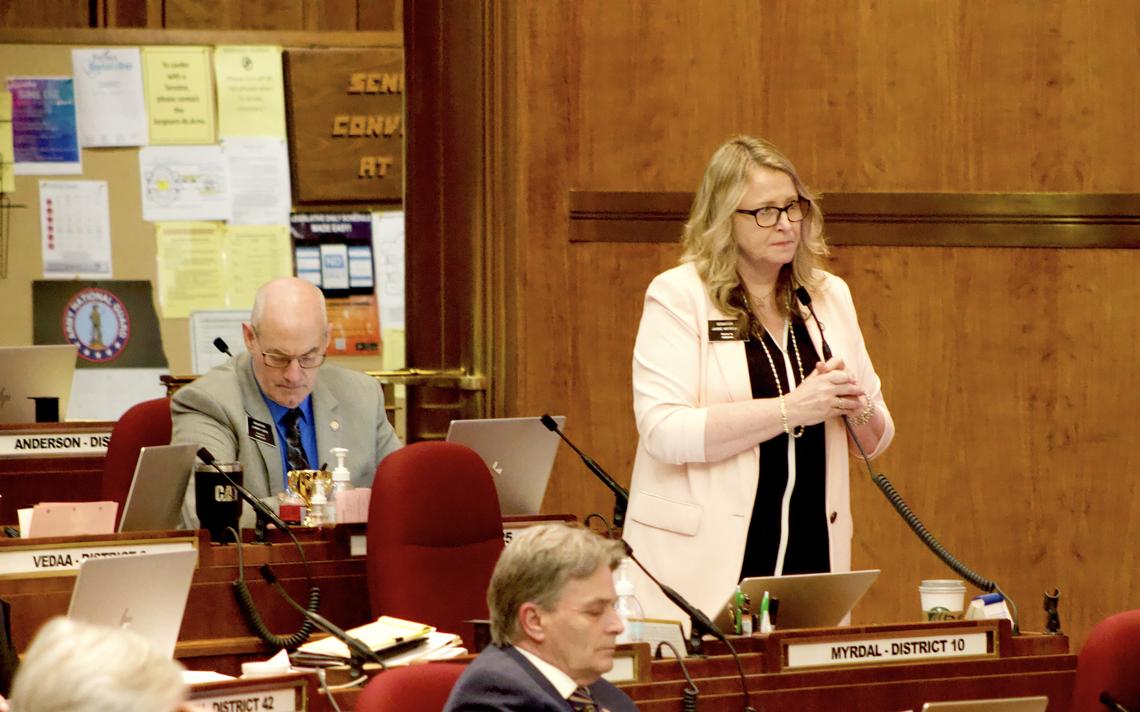 She’s the only Democrat elected to public office in an area that can plausibly be described as “western” North Dakota. Which, in turn, means she’s one of the few Democrats in the state who has figured out how to get elected in a district that’s not an enclave for a college campus or Native American reservation.

But she may not run for re-election.

“That’s a possibility, yes,” she told me when I asked if she might give up her seat in the 2022 election. “I’m trying to remind myself not to make a final decision when I’m really frustrated.”

Oban was first elected to the Senate in 2014 when she defeated Republican and deeply socially conservative incumbent Margaret Sitte. Her decisive win in a Republican stronghold raised a lot of eyebrows around the state. In 2018, her first time running as an incumbent, Oban handily defeated a challenge from one-time NDGOP chairman Gary Emineth.

But now, after a legislative session she says was “disappointing,” she says she’s not sure if she can keep serving.

She blamed her hesitation over a new campaign on the “influx of more people who don’t take seriously the real issues the Legislature should be dealing with.”

“I’m used to working with Republicans,” she told me, noting that her party has been in the minority in the Legislature since she was elected (the Democratic-NPL hasn’t had a majority in either chamber since the 1990s). The problem is what she describes as “extremists” pushing “really divisive social issues.”

Among those issues, in Oban’s view? She named the proposed ban on transgender athletes as well as an amendment that prohibited state universities from partnering with pro-abortion organizations.

Sen. Janne Myrdal, R-Edinburg, voiced her support for Senate Bill 2030 on the Senate floor on Monday, April 26. She said universities will not face adverse consequences from the bill as long as they don’t partner with anyone or any organization that supports abortion. Michelle Griffith / The Forum.

The former bill was ultimately vetoed by Gov. Doug Burgum, while the latter was partially vetoed, with Burgum stripping out the fiscal penalties.

And who are the extremists?

Oban named Republican Sen. Janne Myrdal, a Republican from Edinburg, as a “very rigid” person guilty of an “abuse of power” in her push for the aforementioned abortion amendment.

“I think that’s interesting to hear from someone who is on board with Pelosi, Schumer and Biden 100%,” Myrdal said when I reached her about Oban’s comments, referring to the U.S. House and Senate majority leaders, as well as President Joe Biden. “If there’s something extreme in North Dakota today it’s the minority Democratic Party who think we should kowtow to the policies of Biden and his minions.”

“I’ve always had a friendly relationship with her. I’m saddened that she feels that way,” Myrdal added.

“I want to be good if I’m going to do it,” Oban said about running for another four-year term.

She also responded to rumors about a potential federal appointment coming from the Biden administration.

She told me that is not factoring into her decision about the state Senate and that she’s had no conversations with anyone from the Biden administration about an appointment.

City of Velva working to clean vandalism from park bridge