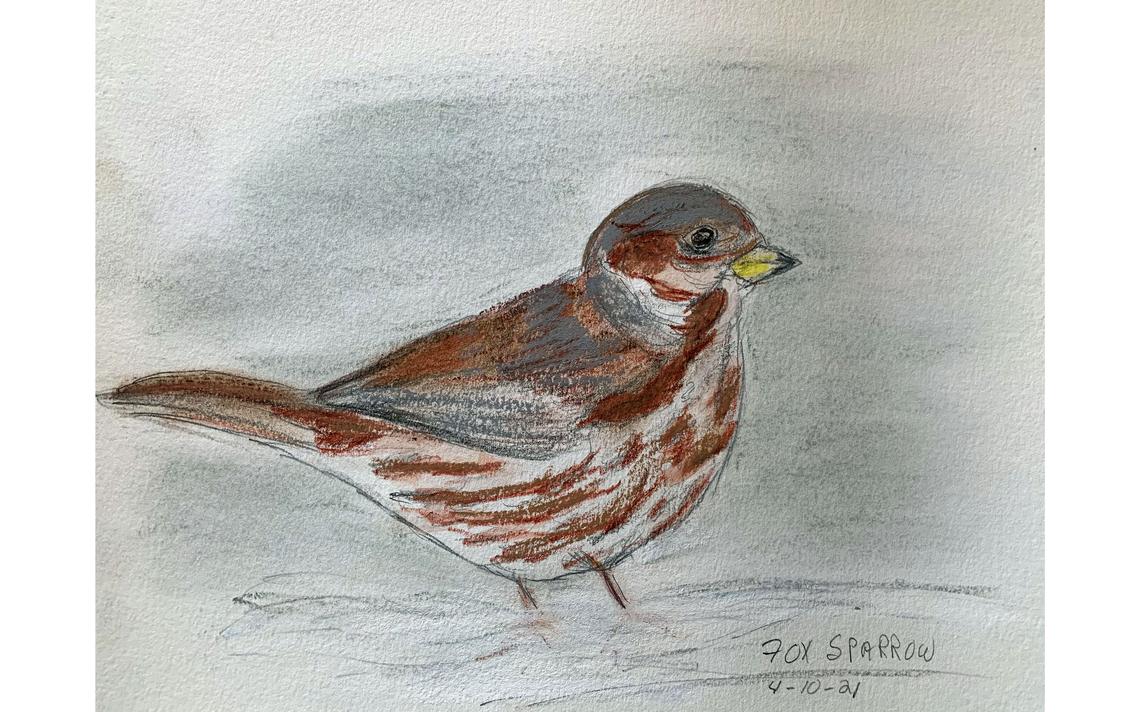 MINOT, N.D. – The first fox sparrow of the season showed up at the feeder array at our place west of Gilby, N.D., about 10 days ago. About the same time, reports of fox sparrow sightings began in Grand Forks. On Tuesday evening, four fox sparrows were at a tray loaded with sunflowers seeds that’s visible from the kitchen table, and then I knew the fox sparrow had to be bird of the week.

The fox sparrows aren’t going to hang around. They’re northward bound. The nearest nesting area for fox sparrows is in northern Manitoba.

It’s possible that these migrating fox sparrows have a longer trip ahead. Scott Weidensaul mentions the species in his new book, “A World on the Wing.” An individual equipped with a gadget called a “geolocator” was recaptured on Alaska’s North Slope. It had wintered in Georgia. A straight line between those points pretty much crosses Grand Forks County. Perhaps the birds do, too.

The fox sparrow is large – the largest of North American sparrows – and easily recognized. The overall impression is of a robust bird with bright rust-colored streaks and blotches on its chest. The head and back are grayish rust in color and the top of the head is gray – in most birds. Fox sparrows can show a lot of variation in plumage.

This variation has led to disagreement about exactly how many kinds of fox sparrows there might be. Today’s consensus suggests at least 18 subspecies; some authorities divide these among four distinct species. This need not concern local birders. Three of these species are birds of the Pacific Coast. The fourth, the “eastern fox sparrow” is the bird that shows up here. Even the most diligent splitters have found only four species.

Fox sparrows are welcome as among the leaders of the springtime sparrow parade. In most years, only American tree sparrows show up earlier than fox sparrows, and probably some of the tree sparrows are laggards who actually spent the winter here. Fox sparrows sometimes linger into late December, long enough to be counted on the annual Christmas bird counts in our area.

These are active birds, pretty much yielding space at the feeder only to red squirrels. They don’t strike me as particularly aggressive, but they are big – half again as big as the juncos, which are still present in large numbers – probably about 50 – in my yard.

It’s the snow that brought so many to the feeders on our deck. Without the snow, the fox sparrows would have been more likely to seek food spilled on the ground. They have a distinctive way of moving grass and weeds aside to get at any available food. This involves vigorous scratching.

Whether the week’s weather caused more fox sparrows to pause in migration is uncertain. In most spring seasons, they spend at least a few days here, although I can’t be sure, of course, that I am looking at the same birds from one day to the next. Still, I’m pretty confident that I am, and that the birds have stopped to bulk up before continuing their migration.

The fox sparrows are only the vanguard of spring sparrow migration. The next fortnight should bring white-throated and white-crowned sparrows, both named for prominent field marks and easily recognized. Harris’s sparrows should be here by the end of April. These are large birds with a prominent black hood over the head and upper breast, sometimes compared to a monk’s cowl. They’re named for Edward Harris, an associate of John James Audubon.

These three are the most numerous and most visible of the migrants. The Grand Forks County bird list includes 18 sparrows. Of these, five are passage migrants and seven are common in nesting season. Three are considered rare and three occasional, both of which means they may show up, but you shouldn’t count on it.

Efforts to clean up litter in the Magic City