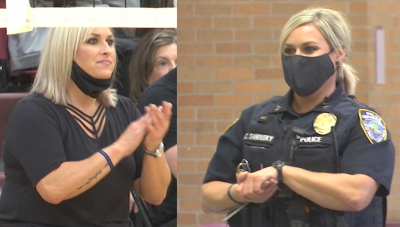 MINOT, N.D. – Inspiring students is something one school resource officer says she takes pride in. In fact, she loves working with students so much, she decided to help them out on the court, too.

“If I can influence one person positively, I’ve done my job. Whether it’s coaching or as an SRO, or if I’ve helped somebody then I’ve done my job and I feel good about that,” said Caisee Sandusky, school resource officer and JV volleyball coach.

Sandusky has been an SRO at Minot High for the last seven years.

“I can do this day in and day out. I can help my community and I can try and make it a better place. Now in this role as an SRO, I have the best of both worlds. I get to be a law enforcement officer, but I also get to be a mentor and a role model and bridge that gap,” Sandusky said.

She knows just how important it is to build these relationships on and off the court.

“You really get to know them and their families. But also for other kids within the school and they come to athletics and they’re like, ‘I didn’t know you coached!’ And they’re just like, ‘Oh, that’s so cool!’ So it’s nice for them to see you outside the uniform,” Sandusky said.

“I originally didn’t until like the first day of school and I saw her and I was like, ‘That’s my volleyball coach!’” said Reese Terrel, senior.

Sandusky played volleyball in high school and throughout college and remembers the bond she formed with her coach.

A few months after she was hired as an SRO, she was asked if she wanted to be the freshman volleyball coach.

“It’s just kind of been a progression and I absolutely love it,” Sandusky said.

In the hallways, some students may be hesitant to approach her because of the uniform.

“She looks intimidating at first, but once you get to know her, she’s very nice and genuine,” said Grace Rood, sophomore.

“She’s a really great person. I know she does come off intimidating, but she’s funny,” Terrel said.

“It doesn’t really feel like a coach relationship, it kind of feels like a family-friend relationship,” said Sofia Egge, junior.

And it’s no different on the court.

She says her coaching style is firm but has high expectations of her athletes because she knows what they’re capable of.

Which has helped many of her athletes, like Terrel, who had her as a coach for three years.

“She is like a straight to the point, get-go kind of person and it makes everyone like just a better player. She always pushes us to do our best and everything,” Rood said.

“She definitely wants us to do well, she wants what’s best for us but she doesn’t expect us to be perfect all the time, which I understand,” Egge said.

“I want them to realize, ‘OK, I need to make this change. If coach says this, I need to do this.’ But hold them accountable for their actions on the court, off the court, all those different things,” Sandusky said.

Whether they win or lose, or if she’s in uniform, or on the court, she says she’s just doing what she loves.

“I take pride in knowing that I have kids who look up to me or who feel like I’ve been an important, influential person in their life,” Sandusky said.

The team is this 3 and 4 this season with nine matches left.