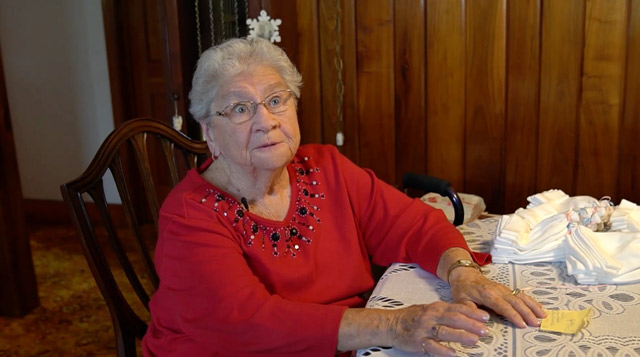 Jeanie Shaffer wants to live until she’s 100, and the 90-year-old plans on spending the next decade making tiny hats for newborns at UPMC Western Maryland.

She’s already spent the past 15 years creating mini hats, so what’s another 10?

Her quest to put caps on all the babies born at UPMC Western Maryland began in 2006 when a labor and delivery nurse at her church asked congregants to make tiny hats.

Shaffer volunteered, and then she realized she was capable of making the hats at home.

It’s now been 15 years since Shaffer began her hat making journey, and so far she’s made over 11,000.

The 90-year-old has become so efficient at making the caps that about once a month, someone from the hospital drives the approximate 15-minute drive from Cumberland, MD to her home in Hyndman, PA to drop off rolls of white stockinette stitch fabric.

She then uses ribbon, which she purchases herself, to personalize the hats.

As she made hat after hat, Shaffer was content knowing that the hats helped the babies during their first few hours out of the womb.

But as Wendy Ruberg, 39, who gave birth to a baby girl in December 2019 explained, “You think it’s just a hat, but it’s such a special part of the whole birth experience.”

Earlier this year, Tracey Clark, who works in the hospital’s marketing department, put out a call for anyone who benefited from one of Shaffer’s baby hats.

The hospital received close to 1,000 photo submissions within a day. They used the photo to compile a photo album and shared it with Shaffer who before then hadn’t realized the special impact she had been making on so many people’s lives.

“I didn’t realize that making hats would go that far,” she said. “And I appreciate that a whole lot.”