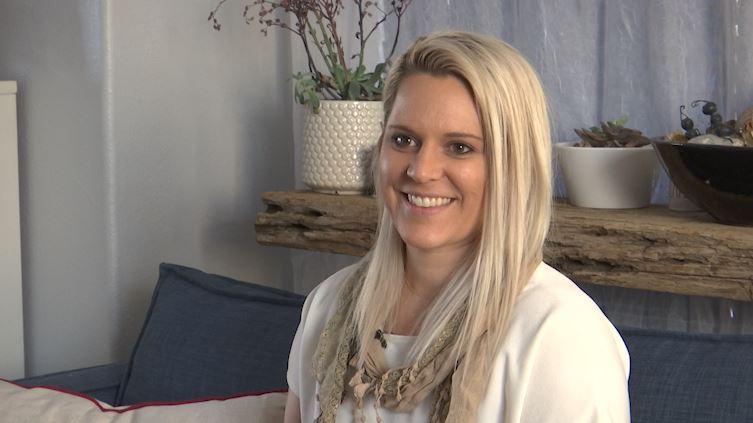 MINOT, N.D. – Entrepreneurship, fitness, and animals have a lot more in common than you might think.

At least, that’s the case for a Minot woman who has applied her love for all three, to achieve her goals.

Simply put, that’s how she’s been able to use her skills in more than one field of expertise.

For starters, she says she’s always had a passion for fitness.

A few years ago she went to a Solidcore class in Bismarck, and her entrepreneurial instincts kicked in.

“I immediately called the corporate office after I had gotten done with that class and I told them, ‘You have to bring one to Minot!’”

She wanted to open one herself.

When she learned it didn’t work that way, she moved on to the next thing.

But not too much later down the road, a Minot studio was ready to open.

She quickly became a coach and is now a manager.

“They’re not complaining and if they are complaining…then by the end of it, they’ve kind of worked out all that frustration and they’re just happy and excited and proud of themselves for what they’ve done and it’s kind of the same as a coach. Because you can come in not really wanting to coach at 5 a.m. (laughs) .. but then leave after that class knowing that maybe you’ve made somebody’s day.”

But her Solidcore hat is one of many that she wears.

“I’ve always kind of dreamed of working for myself and having that flexibility to do what I want, but also to be making some kind of difference.”

That’s where Copper and Daisies come in.

The online gift boutique specializes in gift boxes, bags or baskets for any occasion — large or small.

With degrees in graphic design and business marketing, Bennett has been able to perfect a unique way of gift-giving.

As her website says, it’s as easy as a few clicks and as thoughtful as hours of shopping.

And it doesn’t end there. She says she has another business in the works, that has a similar concept .. and it’s expected to be up and running by this summer.

Plus, her love for animals has brought her to take up dog-sitting as well. Dani Bennett seems to do it all, and that’s what makes her Someone You Should Know.

By the way, Bennett is a Parshall native, moved around a bit in her adult life, eventually landing in Minot in 2017.