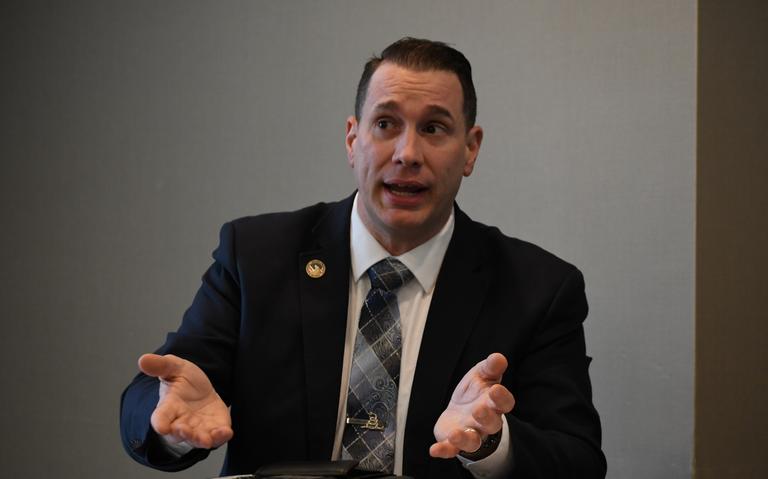 MINOT, N.D. — After a week of bluster and much conspiracy-mongering, disgraced former lawmaker Luke Simons has announced that he won’t be taking his expulsion from the North Dakota House of Representatives to court.

The expulsion was approved by lawmakers last week after I obtained a file of harassment complaints against Simons that had been maintained by Legislative Council, and after I interviewed two of Simons’ fellow lawmakers, Rep. Emily O’Brien, R-Grand Forks, and Rep. Brandy Pyle, R-Casselton, about his conduct toward them.

In a lengthy, meandering statement replete with the same claims of false accusations and gotcha politics that have characterized Simons’ reaction to this scandal from the beginning, he admitted that his hopes of being reinstated to the Legislature are thin.

“The District 36 Executive Committee is willing to reappoint me, but I am concerned that there would be an effort to refuse me being re-seated, even though they should be obligated to do so,” Simons wrote. “If I were to take this to the North Dakota Supreme Court, it may take weeks to get a decision.”

“The House of Representatives continues the people’s business, hearing bills in committees and debating them on the chamber’s floor, and the people of District 36 are not being afforded their full slate of delegates,” I wrote yesterday. “Their underrepresentation a product of Simons’ towering arrogance in the face of his expulsion, and the local NDGOP’s acquiescence to it.”

Let’s all be happy that Simons, finally, decided to set ego aside and serve the people of his district.

One might argue that Simons rarely made much of a difference while he was seated in the Legislature. He was the consummate back-bencher, capable of garnering attention through goofy antics and belligerent behavior, but rarely moving the needle on consequential policy.

His abandonment of a legal challenge to his expulsion is a de facto acknowledgment of his weak case. As proponents of his expulsion have said all along, over the furious denunciations of Simons’ supporters, the Legislature has broad authority when it comes to seating its members.

The odds that the state Supreme Court is going to meddle with the Legislature’s authority in this matter are next to nil.

There has been much blather about “due process,” but the fact is Simons got due process.

Per Simons’ own admissions, he was confronted over his behavior many times during his time in the Legislature. He frequently apologized for that behavior and promised to do better. Despite his many claims of a conspiracy set on doing in his political careers, not once did any of the people he harassed initiate contact with the news media to tell their stories.

Simons was given multiple opportunities over the course of years to change his behavior. He didn’t, and now he’s paid the price for that arrogance.

Who will District 36 pick to replace Simons? It would be a smart thing to choose someone who already has some legislative experience. The person chosen will be tasked with hitting the ground running in a legislative session that is already past crossover and quickly coming up on the home stretch to a conclusion.

Another lingering question is whether or not Simons could run for his seat again in the future. Political observers in the Dickinson area aren’t ruling out the idea that Simons could get elected again, especially if voters in District 36 buy into his obnoxious but vigorously made claims of a political conspiracy instead of the more prosaic reality of Simons simply being an uncouth, unrepentant bully.