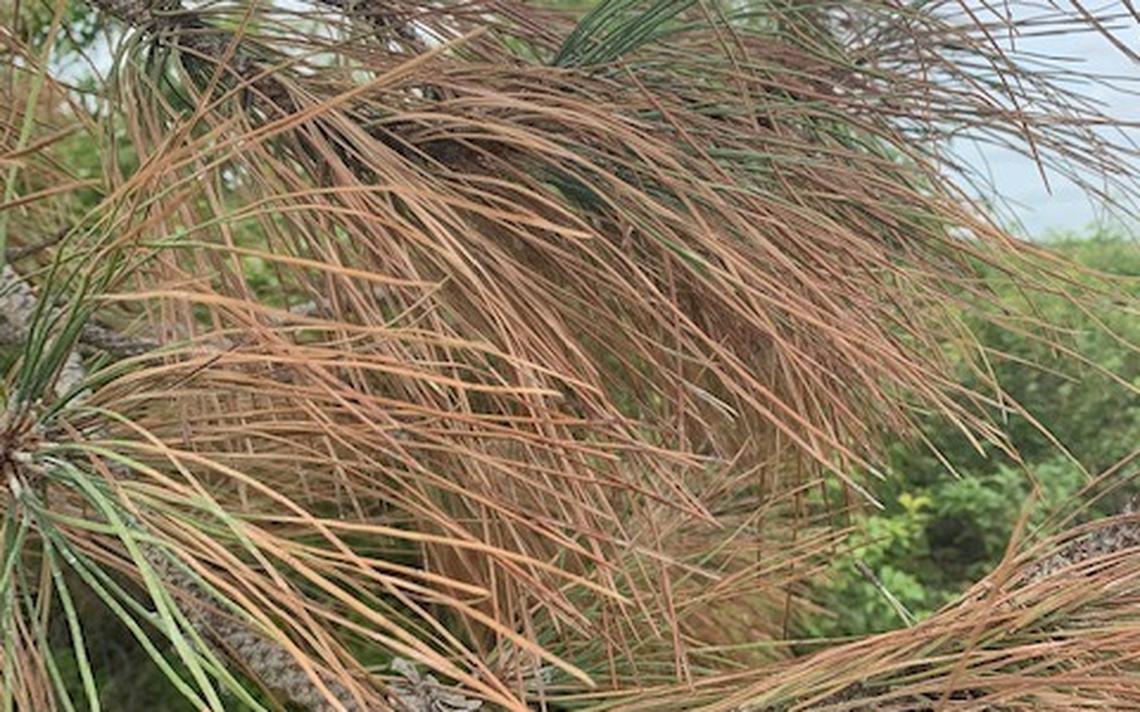 N.D. – The past year has not been kind to area evergreen trees. Dead, dying and damaged conifers have become all too common across North Dakota.

Because the problem is widespread and dramatic, North Dakota State University Extension Forester Joe Zeleznik prepared an analysis of the situation to help answer the many questions about causes and remedies. “The causes are varied, and treatment recommendations are equally diverse,” Zeleznik says.

During the past month, pines and spruce trees across the state have shown symptoms of decline. In 2020, many ponderosa pine trees died in shelterbelts and yards.

“We believe that the extremely wet fall of 2019 is to blame,” Zeleznik says. “Soils were saturated in many areas, especially following the big snowstorm on Oct. 10-13, 2019. Even areas that were not necessarily low spots accumulated a large amount of moisture. The saturated soil either killed the pines’ root systems directly or else kept the trees from developing full hardiness before the winter.”

Symptoms on pines were dramatic. Entire trees died, showing symptoms throughout the whole tree, seemingly all at once. In most cases, the trees showed no progression of symptoms from bottom to top or interior to exterior. Instead, trees began to grow in the spring of 2020, then simply stopped, with the needles turning brown.

In examining pines across the state, infectious diseases were not found to be a prevalent cause, and as such, there are no sprays or chemical treatments that will mitigate these environmental causes. Additional deaths of ponderosa pine trees are expected in 2021.

More recently, spruce trees have been showing a variety of symptoms that have been diagnosed with the broad term of “winter injury.” Winter injury generally shows up as early as February but is more commonly seen in March or April.

Needles often turn a purplish-brown as they die. This dieback often has no pattern. The needles that die may be on one side of the tree or on the bottoms of branches, but they also may be scattered throughout the tree crowns. Sometimes, only needle tips are dead, while in other cases, entire needles die outright.

Affected trees can be right next to trees that are showing no symptoms. On occasion, entire trees may turn brown and die.

“Wildly fluctuating temperatures in February and March are often to blame for winter injury,” Zeleznik says. “This year, the drought of 2020 is likely a major factor in the damage. Additionally, pests such as spider mites or pine needle scale may play a part, especially in those trees where the damage doesn’t follow a pattern.”

Treating trees is difficult because most of the damage is due to environmental problems.

“Specifically, water those trees that are suffering from drought,” he adds. “A long, slow soaking is better than multiple, brief additions of water. Move the hose around because the tree’s roots extend in all directions from the stem.”

The roots go out far beyond the drip line of the tree crown, extending to as far as four or five times the height of the tree. The ground should be moist, not saturated, after watering.

Zeleznik also recommends scouting for pests such as insects and diseases, and being prepared to treat them appropriately. Scouting is important because treatment timing is critical to be effective. Spraying for a pest at the wrong time of year is ineffective and a waste of time and money.

Although environmental factors have caused the most recent evergreen decline for which there are few, if any, remedies, several spruce diseases are also common on area spruce trees. Rhizosphaera and stigmina needlecast are fungus diseases that cause needle loss over time. Black, dotlike fungal fruiting bodies in rows can be seen on needle undersides with the help of a hand lens.