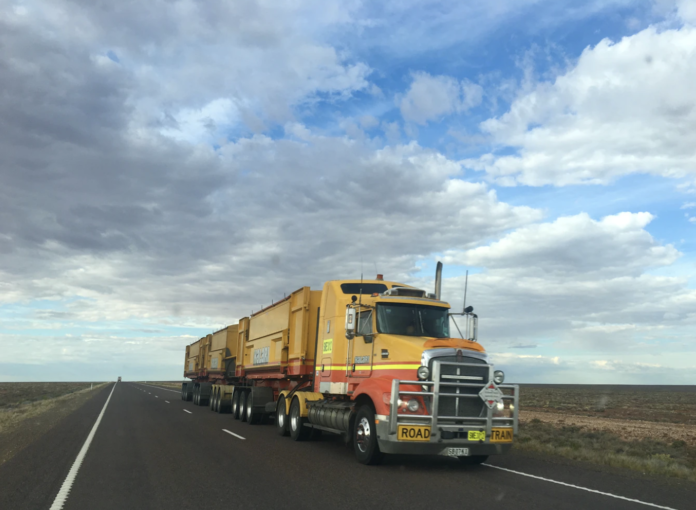 N.D. – The extra-long semitrailer trucks sometimes called “road trains” may be headed for a road near you soon, after a trial run for the vehicles cleared a final legislative hurdle on Friday, April 16.

Both the North Dakota House and Senate greenlighted a pilot program for the truck platoons on Friday, sending the proposal to Gov. Doug Burgum’s desk. The measure passed the Senate in a 39-6 vote and cleared the House 70-22 later in the day.

If signed into law, Senate Bill 2026 would introduce the long truck platoons to North Dakota roads in a limited-scope pilot program overseen by the North Dakota Department of Transportation. Plans are already in place for the big trucks to start running in the northwest corner of the state, near Crosby, according to Minot Republican Sen. Oley Larsen, who sponsored the bill.

Road trains aren’t legal in many parts of the world, though backers of the idea in North Dakota have said they took inspiration from the Australian Outback, where an extreme version of the truck platoons operate on mining roads. The pilot program will allow for trailers to exceed the 105 foot federal limit, but the North Dakota trucks likely wouldn’t get near the length of their Australian counterparts.

Larsen and Sen. Larry Luick, R-Fairmount, who has spearheaded an effort to bring road trains to North Dakota for close to eight years, have argued that shipping could be done at much higher efficiency since the horsepower on today’s trucks allows for them to carry heavier loads than is legal under state and federal regulations.

Still, road trains have become a flashpoint of North Dakota transportation debates, and many critics have worried that bigger, heavier trucks will damage local roads while putting drivers at risk.

An earlier version of the legislation was scrapped this session out of concern that vague language didn’t give lawmakers control over what they were allowing on North Dakota highways, but a more specific outline for the pilot ultimately picked up broad support from House and Senate lawmakers. The governor has three days to act on the bill after receiving it, though the margin of Friday’s vote would be enough to override a veto in both chambers.

Sen. JoNell Bakke, a Grand Forks Democrat, said she has previously opposed road train legislation but came around on Friday. Though Bakke has been resistant to the idea of having these large vehicles alongside drivers in North Dakota’s frigid and windy conditions, she said she felt comfortable that the controls on the project would allow it to be implemented safely and answer questions about the safety of the trucks and their impact on the roads.

Bakke said the road trains could provide huge savings to people hauling grain and other crops, and the pilot program would put the unknowns to the test.