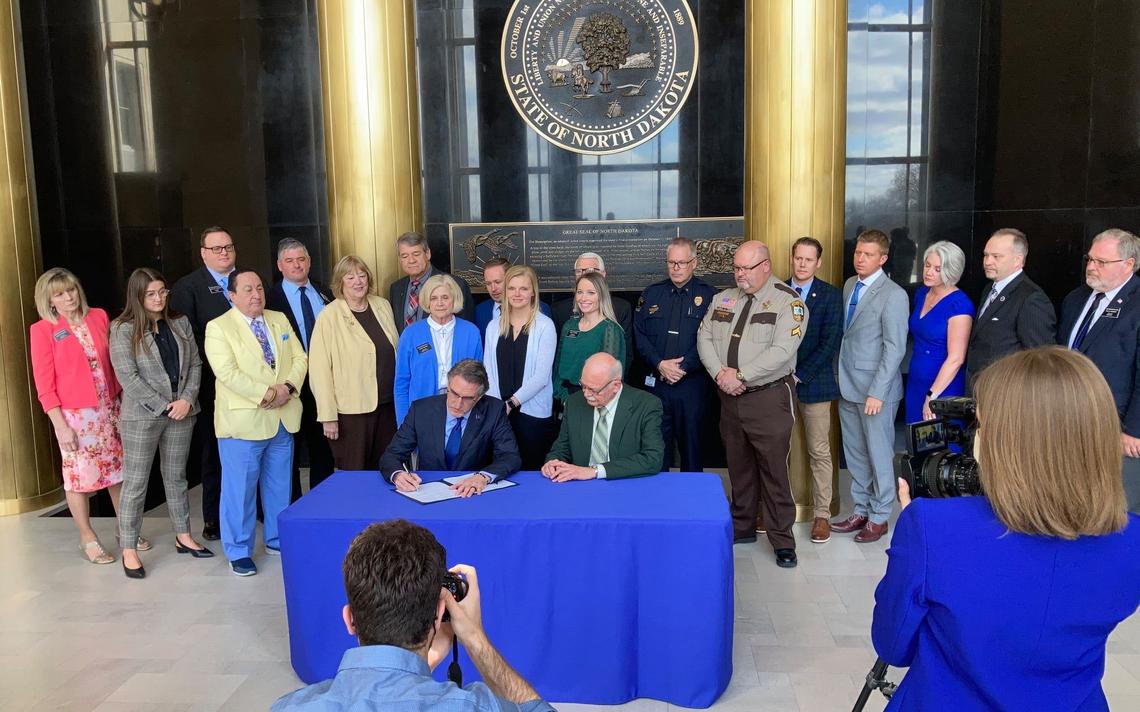 N.D. — A North Dakota lawmaker who voted against a proposal to extend state health care benefits to the families of fallen emergency responders joined a photo-op celebrating the signing of the bill into law on Monday, April 19.

House Bill 1435 passed the House chamber on February 15 in a 75-18 vote and later cleared the Senate by a wide margin. The proposal, which Gov. Doug Burgum signed into law while surrounded by first responders on Monday, allows the family members of fallen police officers, corrections officers, emergency medics and firefighters to keep health care coverage under the state plan after their loved-one’s death.

And though Lidgerwood Republican Rep. Kathy Skroch voted against the proposal when it appeared on the House floor, she attended the bill signing event and appeared in a photo-op alongside a bipartisan group of lawmakers, a police chief, the widow of a fallen officer and Burgum as he signed the bill.

In an interview, Skroch said she thought she had voted in favor of the bill when it came to the House floor and that she has supported the idea from the beginning.

“There’s no way I would have gone up there for that photo if I had any question in my mind that I did not support it,” said Skroch, who added that she couldn’t recall what happened when the bill came to the House floor but was surprised to find that she had voted against it when she went back to check the record.

“Because of how much family members suffer in the loss of their spouse. … There’s a tremendous loss, not only financially, but emotionally, and your entire life is destroyed,” she said. “We can’t give them their loved one back, but we can bring comfort in ways like helping them cover their health insurance.”

Of the eighteen House lawmakers who voted against the bill in February, all were Republicans. Several of the bill’s opponents were members of the ultra-right wing Bastiat Caucus, which tends to be wary of government spending.

Skroch’s appearance in the photo-op was criticized by the North Dakota Democratic-NPL party in a tweet Tuesday.

“Big shout out to Rep. Kathy Skroch (far left in pink) for attending a bill signing for a bill that will cover costs for surviving families of first responders who die in the line of duty,” the party said in a statement on Twitter. “BIG PROBLEM: She voted against the bill. Par for the course for the @NDGOP.”

The bill’s primary sponsor, Grand Forks freshman Rep. Zac Ista, a Democrat, said that he would like for the focus to be on the outcomes of the new law rather than on opposition to the legislation. But he also noted the bill drew opposition from several members on the other side of the aisle, including Skroch’s district colleague Rep. Sebastian Ertelt, R-Lisbon, who spoke against the bill on the floor.

“The fact of the matter is some on the far right did oppose the bill and we heard arguments from them that the families of fallen officers shouldn’t get special treatment,” he said. “Whether that was her intention or not, her entire district voted against the bill, and I’ll leave it to (the voters of her) district to decide.”

Finally, Some Not Terrible News For Trans Youth, This Time From North Dakota