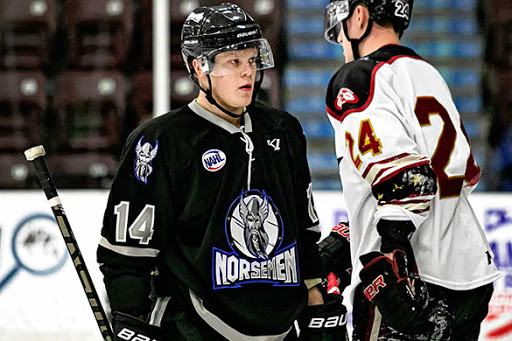 MINOT, N.D. – The St. Cloud Norsemen offense erupted in the first period as they defeated the Minot Minotauros 6-2 in the lone NAHL game on Sunday night in St. Cloud. Six different players scored in the win for the Norsemen.

The game was put out of reach early in the game as St. Cloud grabbed the early lead with Brett Chorske’s 10th goal of the season before quickly adding to the advantage with Nik Hong’s eighth of the campaign to make it 2-0 just 6:48 into the game After killing off a mid-period penalty, the Norsemen added a third goal from Ryan O’Neill. Shortly after, the Norsemen chased Minot’s Keenan Rancier from the net with a fourth goal from Jack Reimann, which made it 4-0 after one period.