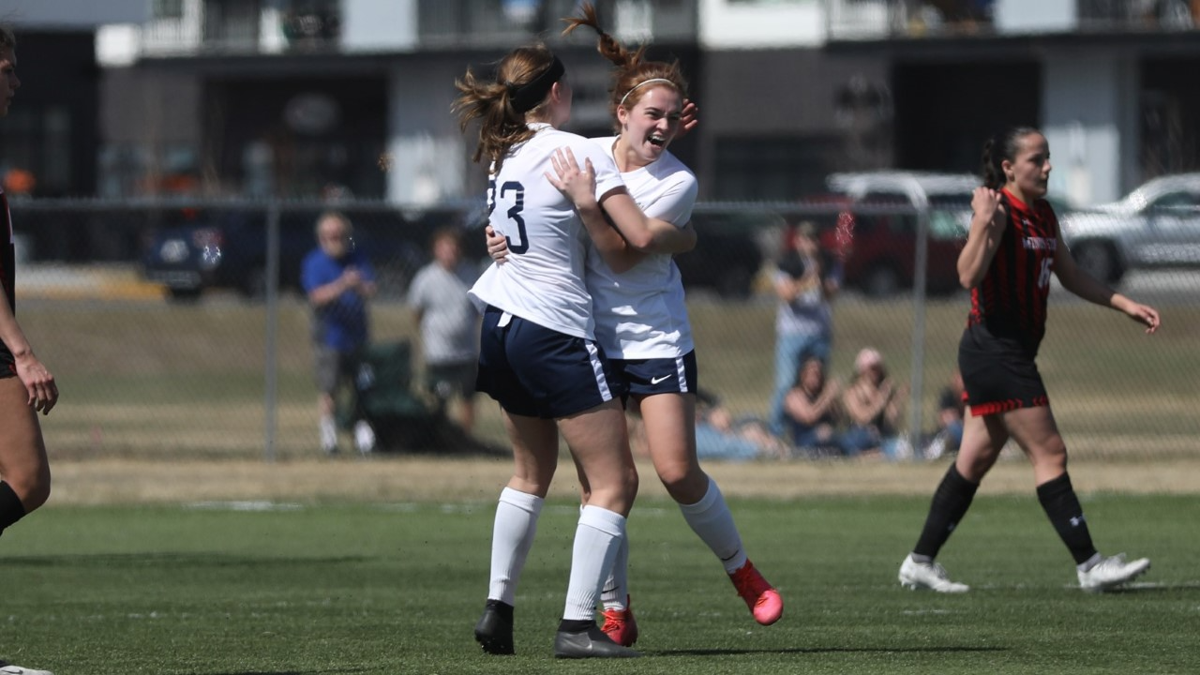 MINOT, N.D. – – A goal in the opening three minutes of Saturday’s match at Yellowjacket Field sparked the Montana State University Billings women’s soccer team to a triumphant 4-1 victory over Minot State University in the 2021 home debut.

Lexie Bloyder netted her second goal of the spring just after the second minute of play, and MSUB never looked back en route to the revenge win over a Beaver team that beat the Yellowjackets 3-1 in Minot, North Dakota, on February 28. “We were not happy with our last result against Minot State, and we knew coming in it was going to be a hard game,” said freshman Izzy Menning, who has played in all seven matches this spring and has started five. “We came out with energy, and I knew from the minute we kicked off that it was going to be a good game and that we were going to make the most of it.”

Menning scored the first two goals of her collegiate career, including what proved to be the game-winner in the 14th minute of play. Freshman Vendela Andersson added her first-career goal as well, sealing the victory with a dazzling header finish in the 65th minute. “I am really proud of the energy, effort, and the skill that we brought out today,” said MSUB head coach Stephen Cavallo. “I thought it was a total team performance, and we saw a large number of our bench supporting, coming in, and making a difference in the game.”

The Yellowjackets nudged their record up to 3-4 with Saturday’s victory, while Minot State slipped to 4-3 with the defeat. Sofia Lewis scored her team-leading sixth goal of the spring in the 38th minute to account for MSU’s offense in the match.

Taylor Gertsch put forth the best performance of her young collegiate career, playing 76 solid minutes in the midfield unit and acting as a key distributor on the ball. Gertsch also tied for the team lead with three shots in the match, placing two of them on target.

Running onto a first-time shot with her left foot from the top of the box on the right side of the field, Bloyder stuck with her initial attempt which was deflected back towards her. The junior followed up with a crafty right-footed strike that carried just under the crossbar and into the back of the net. “Lexie is such a hard worker, and she makes things happen on the field,” said Cavallo. “It was great to see her score that early goal, and we started the game great.”

Perhaps the most important individual contribution in the match came from Yellowjacket goalkeeper Clare Keenan less than 60 seconds after Bloyder put the team in the lead. Lewis was awarded a penalty kick after being fouled in the box, but Keenan read the shot perfectly and dove to her left to knock away the low, on-target attempt. The freshman then leapt to her feet and denied another point-blank attempt from Lewis to protect MSUB’s early advantage. “For me I just have to reset,” Keenan said on her mentality facing a penalty kick. “I just turn away and take a deep breath, commit to a side and go with it. It’s just kind of muscle memory in the moment. You have so much adrenaline, and after knowing you saved the first one you just want to be there for your team.”

The Beavers nearly equalized in the 12th minute, when Melani van Walstijn slotted a ball through to Maddie Underwood inside the box. The striker rolled a shot towards goal, but it glanced off the far post as the ‘Jackets dodged a bullet.

Menning’s first goal of the day followed two minutes later, when she launched a booming volley high into the goal box coming off a throw in. The strike carried over the head of MSU goalkeeper Mackenzie Long and tucked neatly under the crossbar to make the score 2-0. “We worked on throwing it in and volleying it to the goal in practice, and I just kind of sent it,” Menning said on the 30-yard strike. “The second one was definitely better – I just cut and blasted it to the top corner. It was awesome.”

The Beavers made things interesting directly before halftime, when van Walstijn slotted a through ball into the goal box for Lewis to run onto. The MSU striker beat her defender to the ball, and tucked an unstoppable low shot just inside the far post to make it 2-1.

Six minutes into the second half, Menning boosted the Yellowjackets’ score line with a skillful display of talent on the ball. Beating three defenders into the goal box on the left side of the field and simultaneously misdirecting Long with her momentum, Menning created enough space to blast a high shot across her body and back towards the upper near post to make it a 3-1 game.

Although the Beavers managed five more shots in the game, Keenan handled all of them without issue as she sealed the victory between the posts. “Of all the games we have played this season, this is the one we have meshed the best,” Keenan said. “The team chemistry was just there today, and it didn’t matter who was on the field. Everybody came to play, and it obviously showed.”

MSUB wrapped up the scoring in the 65th minute, when a foul just outside the goal box resulted in a dangerous set piece opportunity on the right wing of the pitch. Kelsey Hogan delivered a picture-perfect cross that curled to the top of the six-yard box, and Andersson charged forward into open space to nod the ball into the back of the net. “Kelsey really brought a lot to the game today, especially in that second half,” Cavallo said. “She floated that ball up perfectly for Vendela, and we have been working on header technique in training. She scored a great goal, and it was a perfect play.”

The Yellowjackets out-shot the Beavers 20-14 in the match, and placed nine attempts on frame while MSU managed eight on target. Keenan finished with seven saves in the match to earn her second victory of the season, while Long had five saves for the Beavers.

SENIOR SENDOFF: The Yellowjackets honored their four graduating players in a pregame ceremony, as Summer Miles, Haley German, Erinn Harder, and Hallie Vervair were recognized for their contributions to the program. German suited up for the first time this spring and final time in her collegiate career, making the start and seeing 22 minutes of action on Saturday.

THE BUZZ: Gertsch was selected as the St. Vincent Healthcare Player of the Game…Bloyder’s goal was the fifth of her career…Saturday was MSUB’s highest goal total of the spring season…MSUB is now 2-1 all-time against Minot State…Saturday was the first-ever meeting between the teams in Billings.

UP NEXT: The 2021 spring season concludes next weekend, with a pair of home matches at Yellowjacket Field. MSUB hosts fellow Great Northwest Athletic Conference team Northwest Nazarene University on April 8 at 1:30 p.m., before closing the season against Carroll College on April 11 at noon. Live coverage for both matches will be available online here.

“The last two matches we just want to put everything together, and it has been an incredibly challenging year for everyone,” Cavallo said. “It has been great to play games like this that keep us focused and make all the crazy COVID stuff worth it. I really want to end the season on a positive.”