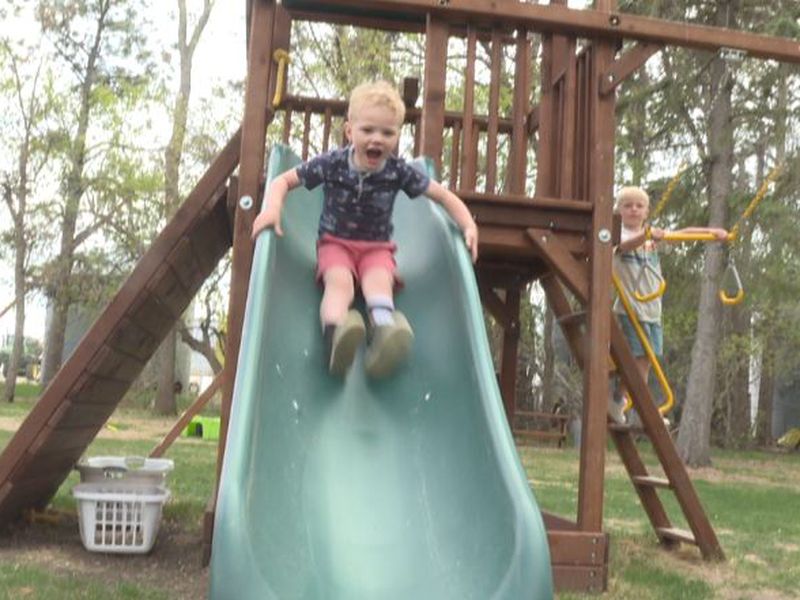 MINOT, N.D. – The third annual Guns n’ Hoses charity hockey game is this weekend and the money generated from it will go to a local boy’s medical expenses.

The sound of Harris Olfason and his older brother Iverson running and playing filled this home this afternoon. However, that was not always the case.

At the start of 2020, Harris was injured in a farming accident. After many surgeries and doctors visits, parents Kaylee and Clinton say they are lucky.

“Relieved I guess that it healed as well as it did. You always wish it could be better but i think we are pretty luck for basically an amputation that he even has a foot,” said Clinton Olfason, Harris’s dad.

Now, Harris wears a special brace on his left foot.

“It makes it feel better and keeps it flat,” said Harris.

But he doesn’t let it stop him from having fun.

“He basically does everything a four year old boy loves to do. He runs jumps climbs, rides his bike,” said Kaylee Olfason, Harris’s mom.

She added that they are so honored to be able to be a part of the charity hockey game.

“We’re grateful. Extremely grateful. Like I said we never thought that we would be in a situation like this, but we are and it’s just nice that the community still wants to help us anyway that they can,” said Kaylee.

The boys are excited to watch the police and fire department square off.

Harris wants the fire department to win and his older brother Iverson wants the police to take home the trophy.

While it may be a uphill battle, Harris is happy to be at home and doing what he does best. Play with his big brother.

The charity hockey game is Saturday May, 15 at 7:00 p.m. at the Pepsi Rink at Maysa Arena.

Tickets are $5. Money collected will go to Harris’s medical expenses.