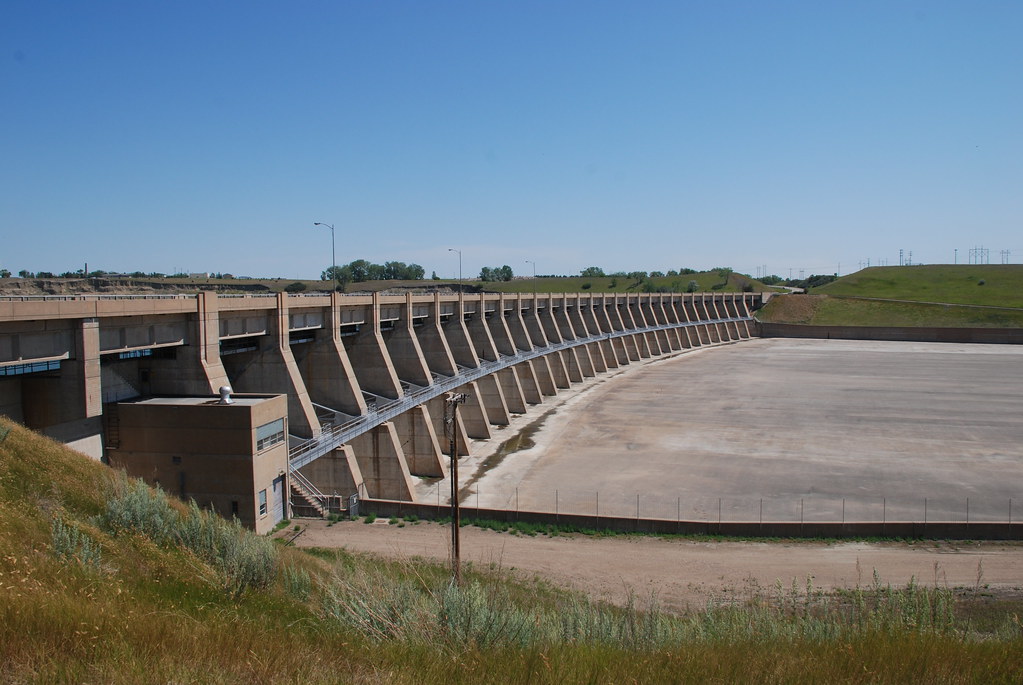 BISMARCK, N.D. — The emergency spillway at Garrison Dam in central North Dakota was subjected to an unprecedented test when flows more than twice the previous record reached the dam during the Missouri River flood of 2011.

An inspection after the flood receded found that the spillway, which had never before been used since the dam began operating in 1955, found damage and exposed a potentially significant safety risk.

Somehow, the scouring Missouri River, swollen at its peak to a record 150,600 cubic feet per second, peeled loose one or two manhole covers in the spillway.

That breach enabled rushing water to enter a drainage system beneath the concrete spillway, designed to collect seepage and prevent frost damage, causing damage and revealing a design vulnerability. In extreme floods, the spillway could fail, resulting in an uncontrolled release of water from the dam.

In that event, the U.S. Army Corps of Engineers would alert emergency managers in communities downstream, including Bismarck-Mandan, located about 70 miles below Garrison Dam.

“The city of Bismarck would experience significant impacts during an uncontrolled reservoir release,” although that has a low probability of occurring, said Jeff Greenwald, lead planner and project manager for a dam safety modification study for Garrison Dam by the Corps.

In all, 12 states including North Dakota, South Dakota, Nebraska, Iowa, Missouri and Kansas, could sustain impacts in the event of a Garrison spillway failure, according to the Corps.

“Numerous bridges and roads would be washed away and would cause numerous and significant travel and commerce delays,” Greenwald said.

“Life safety is the Corps’ No. 1 priority and we take these issues very seriously,” he said. “We want to ensure that Garrison is constructed, maintained and operated as safely as possible. Garrison Dam’s a safe dam.”

Garrison Dam, the world’s fifth-largest earthen dam, is a two-mile embankment spanning the Missouri River. It holds back Lake Sakakawea, which is 178 miles long with a footprint covering 382,000 acres and a storage capacity of 23.8 million acre-feet of water, the largest reservoir in the Missouri River dam system.

The dam’s spillway, which is 1,336 feet wide with 28 gates, has a design discharge capacity of 827,000 cubic feet per second, or almost 5½ times the volume released during the peak of the 2011 flood. The spillway only operates during extreme floods, when the flows exceed the capacity of the powerhouse’s flood tunnels.

Garrison Dam and its associated features “can perform under a wide range of environmental conditions,” Greenwald said.

The Corps, which operates the six dams on the Missouri River, is studying possible modifications to the spillway to prevent a spillway failure.

They aim to prevent the cascading effect that can be unleashed when a torrent of floodwater forces loose any of the spillway’s 29 manhole covers. The force of the water rushing through the drainage system could dislodge slabs of concrete, a process called hydraulic jacking, causing the spillway to crumble and fail.

The study is evaluating multiple possible fixes. A couple of options involve replacing the spillway chute with more durable forms of concrete. One alternative would be to redesign and rebuild the drainage system without manholes in the spillway’s chute.

Another alternative would retrofit the manhole covers and frames. Yet another option would be to inspect and repair the existing drainage system.

The study also will address a secondary concern, the instability of embankment slopes near the powerhouse at the west end of the dam, where sloughing has occurred.

The Corps expects to have selected its preferred alternative later this year and to complete a final report in 2022. Congress would have to appropriate money for a spillway modification.

Spillway performance of the six dams was closely monitored during the record 2011 flood along the Missouri River, which required spillway repairs at other dams in addition to Garrison, Greenwald said.

Garrison’s spillway gates were opened for a second time in August of 2018 to perform a test, a modest release of 9,000 cubic feet per second. Nine of the 28 gates were opened a foot to evaluate the spillway’s ability to regulate incremental adjustments of Lake Sakakawea levels.