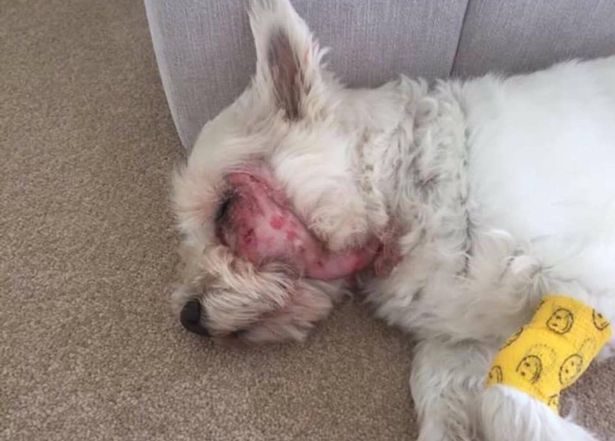 FARGO, N.D. – A Fargo woman is searching for the witnesses that caught her dog getting attacked by another neighbor’s dog.

Her loving pet Beemer was attacked by the dog and dragged into the neighboring driveway.

“I ran over there and grabbed the leash. I didn’t want to pull my dog away because I didn’t know, but I figured he had a hold on him,” she said.

In the midst of the attack, she thought her worst fear would come true.

“I screamed, I said let him go, let him go,” she expressed. “I was screaming so loud and I felt like I wanted to cry. I thought my dog was dead because he wasn’t moving, he wasn’t making any noises.”

Carole says the other dog finally let go after three neighbors were passing by.

“I think they scared him away,” she said.

Too shaken to drive herself, she asked a friend to rush them to an emergency veterinary hospital.

“He’s got a shunt in the top of his head and some stitches. He’s got some stitches on his neck,” she explained.

The attack left Carole with a nearly $700 vet bill. She says she reached out to the owners of the other dog.

I said you are responsible. your dog got out of your yard,” Carole said.

The owners were not willing to fork over the money.

She said, “he wanted me to take the bill back and I said no it’s your responsibility.

Her word against theirs, she is searching for those neighbors who witnessed the attack to hopefully bring an end to this horrible situation.

“I don’t want to make any trouble for them, but if I need to go further pursuing this, I will.”

Have your yard inspected before landscaping, gardening