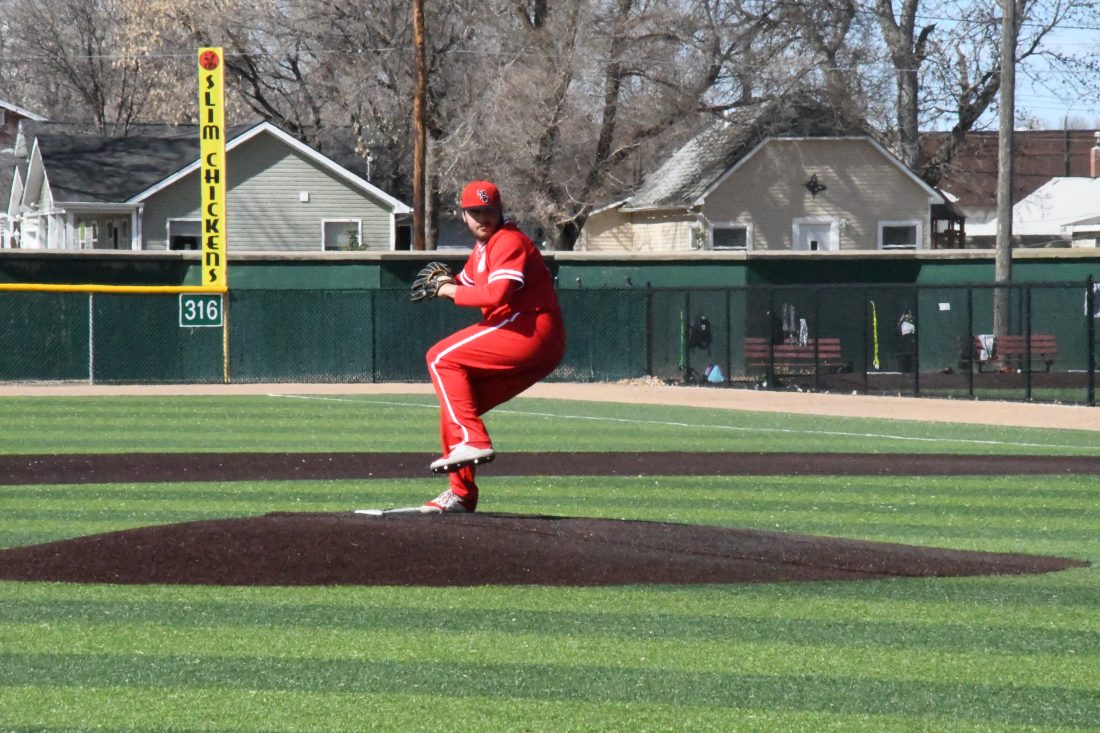 MINOT, N.D. – In the end, familiarity with its opponent did the Minot State Beavers baseball squad in.

After winning two of three games to snag a series win over the University of Minnesota Crookston during the regular season’s final weekend, Minot State was rewarded with another best-of-three series against the Golden Eagles to begin the NSIC conference tournament May 13.

The dominance exuded by the Beavers’ pitching staff did not quite fully return for postseason play, though limited availability of starting pitcher Noah Myhre, due to his feeling “a bit under the weather” per head coach Scott Eul, complicated Minot State’s plans on the mound.

Myhre and fellow starter RJ Martinez raised the Beavers’ hopes entering the tournament, combining for 14 innings of one-run ball and 12 punchouts to lead Minot State over Crookston in the three-game series and help raise the team’s season record to 24-15, but the Golden Eagles hitters were able to better prepare themselves for what was to come.

Martinez again earned the nod to begin the conference tournament and battled through tough innings to give his team as much length as he could. He finished his 5.1-inning outing having allowed five runs on eight hits, but still found holes in Crookston’s bats with nine more strikeouts.

Minot State rallied to take a 6-5 lead entering the top of the ninth inning, but closer Aaron Kern fought through an uncharacteristically shaky appearance, surrendering five runs and the lead in an eventual 10-6 defeat.

“I thought he threw pretty well,” Eul said of Martinez’s start. “They started recognizing some of his pitches a little bit earlier, and that is kind of the downfall of playing a team two weekends in a row. There were no secrets anymore, and I thought they did a pretty good job at laying off some really good pitches.”

As was its modus operandi throughout the season, Minot State played another tight contest in the tournament’s second game, but a late-inning rally that culminated with Kaiden Cardoso’s bottom-of-the-ninth at-bat with the bases loaded and two outs with his team trailing by 7-6 died with the sound of the home plate umpire’s questionable called third strike.

“It was a really good year for us,” Eul said. “There were a lot of ups and downs, I think we learned a ton. We saw a lot of really good performances from some guys that we didn’t expect. It didn’t end how we wanted it to, and hopefully that bitter taste carries into the summer and we can use a little motivation next fall.”

The Beavers can hang their hats on exceptional performances displayed throughout the 2020-21 campaign, such as Jordan Chappell’s outstanding performances that seemed a nightly occurrence.

The junior southpaw enters his final season with the Beavers looking to build upon an eye-popping 0.69 season ERA in his 14 outings, punctuated by his longest relief appearance of his career, a 4.1-inning, two-hit effort in the Beavers’ final game of the season to give his team the best possible chance to pull out a victory. He fanned at least one hitter in every appearance for a total of 47 on the season, and issued only 12 bases on balls.

“Chap was about as good as it gets all year for us,” Eul said of his hurler. “This weekend showed, he was dominant from the first pitch he threw. He was firm and the breaking ball was probably the best it’s been all year. We needed some length out of somebody in the back-end of the ‘pen and he wasn’t a guy who gave it to us much this year, but he emptied the tank for us and gave us what he had.”

Eul was also impressed with the resilience showed by his offense. Minot State was behind the eight ball at one point in both eventual losses, but the Beavers continued to fight, most notably almost erasing a 7-3 deficit in Game 2.

“That’s who we are offensively,” he said. “There’s no quit in this team, and again it showed this weekend. There were a couple of times when they made a couple of plays defensively, we could have thought, ‘Man, this just isn’t our weekend.’ But we didn’t, we kept going up there and putting up competitive at-bats, drawing tough walks and getting out of the box to force errors or putting balls in the gap.”

The Beavers will now attempt to counter the loss of six seniors to graduation and replace not only the production on the field, but the leadership skills Eul pointed to that were demonstrated by players like Nolan Monthei, who hit .294 this season and crushed a pair of timely home runs to give him four RBI in the tournament.

Eul is excited to see his players take a collective step forward in all facets of the game with the benefit of more playing time, and hopes to see some of the team’s elders shoulder the mentoring responsibilities for the next new wave of young talent. A tournament victory remains Eul’s goal moving forward, and the Beavers have every intention of progressing above and beyond their 2021 finish.

Beavers close book on ’21, look to improve upon finish in ’22