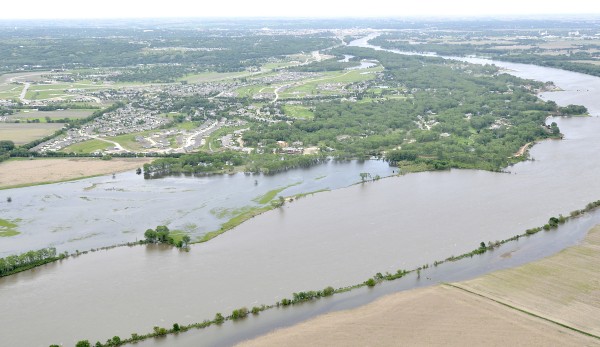 FOXHOLM, N.D. – Something that hasn’t happened for many months is underway in the city. Water is flowing in the Souris River.

No. It isn’t because of recent precipitation but rather because of senior water rights downstream of Minot for the Eaton Irrigation Project. The water is necessary to flood meadows in the Towner area to insure the growth of hay in the heart of cattle country.

“We started releasing 100 cubic feet per second on April 14 and probably will for another day or two,” said Tom Pabian, Upper Souris National Wildlife Refuge manager Monday. “They get the first 11,000 acre feet of water that comes across the border, which is all that’s calculated to come across.”

The release is through the gates at Lake Darling Dam, giving some movement to the Souris River during the midst of one of the driest seasons in history. The river has been so low, and the ground so dry, that it is uncertain how much of the apportioned water will actually reach the Towner area. An unknown amount of water is likely going to be absorbed by parched river banks as it slowly makes its way downstream from Lake Darling.

“They’ll have a closed dam at Eaton,” said Pabian. “Sometime near the tail end of May they’ll drain their meadows off.”

Water levels are very low at the J. Clark Salyer NWS near Upham but, as of this writing, there are no plans to release additional water for that facility. If there is any water remaining to be released off the Towner meadows there is a small possibility that perhaps a few cfs that has not been absorbed into the ground will eventually reach J. Clark Salyer.

Travel time of the water released from Lake Darling to reach Minot was 48 hours. The flow at the Boy Scout Bridge on the city’s west side reached 102 cfs Monday. Further downstream, the gauge on the Souris near Verendrye read 15.5 cfs Monday, a slight rise that indicates the slow progress of the released water.

The long-term average flow at Foxholm this time of year is 655 cfs and 803 cfs at the Boy Scout Bridge. Just how dire the drought situation is in the region is evident at the Westhope gauge where the flow in the Souris was a scant 6.88 cfs Monday as compared to the long-term average of 1,220 cfs.

When asked if the release of water from Lake Darling would lower the reservoir, Pabian replied, “We will maintain where we are at.” Essentially, Lake Darling is passing through the same minimal apportionment that is coming down the Souris from Saskatchewan.

The level of Lake Darling was slightly over 1,595 feet Monday, below its summer operating level of 1,597 feet. Likewise, Saskatchewan reservoirs Grant Devine at Oxbow and Rafferty and Boundary near Estevan remain below their preferred operating levels with no further runoff that could boost water levels currently in the system.

Lake Darling is a shallow reservoir, mostly a depth of 10-12 feet, and quickly shows the effects of low water. Long-range weather outlooks for both Saskatchewan and North Dakota favor less-than-normal precipitation through the summer months with three-quarters of North Dakota, including all of Ward County, considered to be in extreme drought.