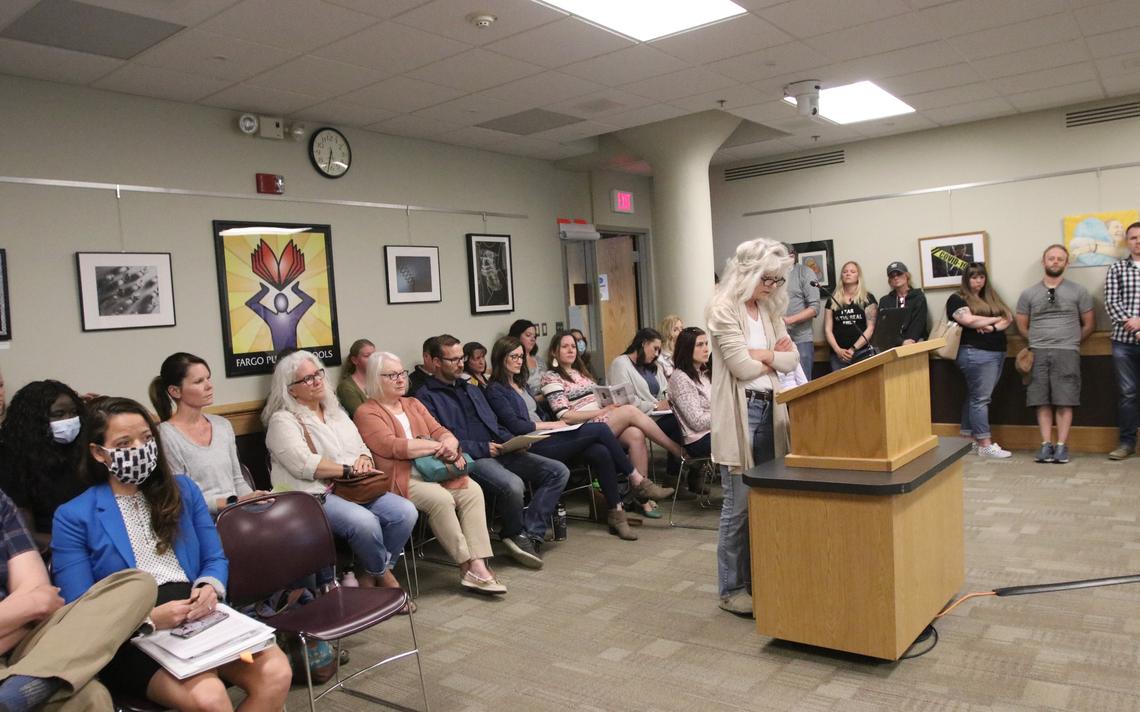 FARGO, N.D. — In a board room crowded with concerned parents, the Fargo School Board voted to suspend the district’s Smart Restart Plan starting June 7, and to end mask usage by elementary students while in the playground and for middle and high schoolers while involved in outdoor activities starting Wednesday, May 12.

The new protocols will end masks and mitigation strategies for summer school, but administration reserves the right to change instructional levels according to health department guidance.

Students who come into contact with classmates who tested positive for COVID-19 while outside also can continue to attend classes. If needed, contact tracing will no longer be performed by schools, but by local and state health officials.

The district’s Smart Restart plan was the protocols put in place last summer to define instructional levels for students.

Board member Jennifer Benson argued wearing masks should be made a choice because the guidelines are recommendations. She questioned the school board’s authority to maintain a mask mandate after Gov. Doug Burgum ended the state of emergency on April 21.

Paulson, who made the original motion during the April 27 board meeting, said at the time that the issue of mandatory masks puzzled him because athletic programs have been allowed to continue throughout the school year.

Superintendent Rupak Gandhi said that after the April 27 board meeting, the state’s department of health and the Centers for Disease Control and Prevention updated their guidance to allow students to take masks off while participating in outdoor activities.

His job, Gandhi said, was to follow guidance from local and state health officials, and if the board didn’t pass the motion he would still be compelled to alert district principals to the changes.

“Administration doesn’t know if something is controversial until it’s controversial,” Gandhi said. “It’s my responsibility to follow the local health guidelines, but if we’re not to follow one of the recommendations then the board should tell us that.”

When Benson made motions to end masks and the Smart Restart plan immediately, Brenton Nesemeier, an epidemiologist with the North Dakota Department of Health, said that some districts within the state that no longer require masks have seen clusters of COVID-19 among students.

“We have done so well this year and we have some end of the year school events that may need help from our students. I think it’s better to be consistent and we’ve done it so far this year,” Nesemeier said.

The Food & Drug Administration has also recently authorized a vaccine for kids 12 to 15, which is scheduled to begin rolling out within the next two weeks, Nesemeier said.

Before the motions passed, board members faced more than 50 concerned parents demanding an end to masks before the school year ends.

Kelly Turner, a Fargo resident spoke before the board saying that forcing children to wear masks is ineffective and dangerous, depleting oxygen levels.

“A mask can put children at risk for infection with a far worse outcome,” Turner said.

Chris Anderson, from Fargo, has four kids in Fargo Public Schools, and said that the importance of masks was made by a small group of people in leadership.

“What the world has been told about the current situation is not reality,” Anders said. “COVID-19 was a virus created as a bioweapon against the world to affect the 2020 election and drive distance between families and communities. It was a planned criminal operation and about world control and population control.”

Nicole Larson, a nurse with 25 years of work experience, has three children in Fargo Public Schools and said it was time to stop the madness over masks.

“I’ve been in awe of the hypocrisy, and I don’t understand what is going on. I see pictures of people in the school together even outside working without masks on,” Larson said. “We’re not all the same, we all have different issues, there are people out there who cannot handle a mask.”

Rita Ludemann, from Fargo, has a son in Fargo Public Schools. She testified on April 27 about how masks were affecting her son.

“I have to ask you this, are you listening? I gave you testimony about a child being harmed and I am a social worker. I am not just a fierce mama bear, I have education behind me,” Ludemann said.

“With all due respect, Dr. Newman, you are not my doctor and I get to choose my doctor as well as everyone in this room,” Ludemann said.

Not all parents were wanting to see an end to masks in district schools. Melissa Burkland, said the coronavirus pandemic is not over and will not be over until the area reaches a critical mass of vaccinated community members.

“I respectfully request that you keep our current mitigation strategies in place. We know that new COVID variants are more transmissible and infectious, meaning that children can get and spread COVID,” Burkland said.

“Those with the least amount of training in the law and science are the fastest to declare non-existent liberty interests and baselessly reject proven scientific theories. Please do not fall prey to this,” Burkland said.

Legal resources provided for those in custody